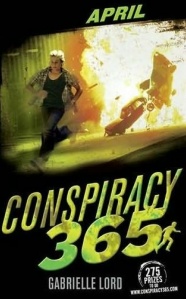 On New Year’s Eve, Callum Ormond is chased down the street by a crazed man with a deadly warning: They killed your father. They’ll kill you. You must survive the next 365 days! Stranded in the middle of nowhere, terrified and alone, Cal is on the run. Somehow he must make sense of his father’s mysterious drawings and solve a family secret from the past: the Ormond Singularity. But first he has to dodge the police and thugs who are closing in on him, and save his sister’s life. He has 275 days. His world is falling apart…

Final Thoughts:
The mystery is slowly unfolding, but there is still plenty to keep you guessing. More enjoyable than the previous books and with an ending like this one, it has me excited for more to come.

Cal’s still running after their little collision off the highway at the end of the last book. On his way to visit his great uncle for any answers he may have to the mystery surrounding his family, Cal is brought back to reality. His Mum is about to pull his nine year old sister off life support after three months in a coma. This effectively quashes his current plans putting him on a mission to save his sister.

He has to battle with army firing ranges, highway road blocks and even an old granny. It seems everywhere he turns there are cops after him. What gets me is why they aren’t out chasing down more important criminals; it seems the whole state has been put on alarm for just one fifteen year old. He is constantly reusing an alias whenever someone thinks the recognise him, which happens a lot.

I’m glad they finally have the Ormand Riddle in this book, it feels like pieces are starting to come together. Winter and Boges still at each other’s throats as to who is better ally, is a fun addition. The way the plot was rolling out at the start of this book regarding Gabbi at the hospital, I felt like a twist was coming, but it never eventuated.

Unfortunately the doppelganger storyline wasn’t touched on much this book either. I was looking forward to that. It is progressing, just a little too slow for my liking. I’m thankful at least that I’m reading this series now with all of the books already available. The way these books end would leave me frustrated if I had to wait for a new one each month.

If you feel like I’m bombarding you with these tween book reviews, don’t worry I’m only reading one more in this series for now. I’m going to have to venture to one of the larger libraries to find June through December.

Recommended to:
Those who enjoy conspiracies (hence the title) and teenage angst. Make sure you have all the books in the series before you start.