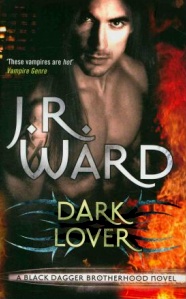 In the shadows of the night in Caldwell, New York, there’s a deadly turf war going on between vampires and their slayers. There exists a secret band of brothers like no other – six vampire warriors, defenders of their race. Yet none of them relishes killing more than Wrath, the leader of The Black Dagger Brotherhood.

The only purebred vampire left on earth, Wrath has a score to settle with the slayers who murdered his parents centuries ago. But, when one of his most trusted fighters is killed – leaving his half-breed daughter unaware of his existence or her fate – Wrath must usher her into the world of the undead – a world of sensuality beyond her wildest dreams.

Final Thoughts:
Lots of romance, sex and vampire lore, made this one a very enjoyable read. A very promising start to this long series. I can’t wait to start on Lover Eternal.

Hard-ass, yet reluctant, vampire king, Wrath, is thrust into the life of a young woman, Beth. Beth has no knowledge of her vampire lineage or the fact that she’s about to go through her transition which could either make her one of them, or kill her. She’s introduced to Wrath, originally believing him to be a cop sent to look after her. Without much hesitation on her part, she’s quickly thrusting herself into him, practically begging him to take her to bed. I actually found myself laughing at this point, it was just so random.

Beth rapidly entwines herself in Wrath’s life as the two of them form a strong bond. With Beth’s cop friend, Butch, tailing her, being with Wrath is anything but simple. Confusion over drug dealing and the mob ensue. Meanwhile, a group of impotent vampire slayers, called Lessers, are busily recruiting new members, as well as killing prostitutes to lure in unsuspecting vampires.

The book splits off between many perspectives, but it’s actually done quite well. I never felt confused. A great deal of the headspace is shared between, main characters, Beth and Wrath. It’s fun getting to know how both are feeling towards each other. You see Beth’s bewilderment in learning of the vampire world around her. With Wrath, we get to see how deep his feelings truly are for Beth. Originally, outside views would have you believe he is cold, harsh, but in fact, he really does care about the feelings of others.

Whenever we switched over to “Mr X”, for the Lessers’ POV, I found myself grumbling to get back to the romance. I know we needed to be inside his evil mind to build up the tension, but really, I’d be happy with the Brotherhood existing in isolation, they were so much more fun to be around. A bunch of huge, rough men, who’d soon as rip your head off, then say hello, with their snarky remarks and love of hip-hop, it really brought their dynamic to life for me.

Unlike the usual vampire farce, we were treated to a very distinct and in-depth world. Vampires here, still can’t move about in sunlight, but that is where the similarities end. These drink only from other vampires of the opposite sex and vampires cannot be made of just anyone, they must be born of another vampire then transitioned around age 25. I really enjoyed the lore, and all of new terms that Ward has created. Luckily she has included a Glossary at the front if you find yourself needing to refresh on what a Leelan is.

Last of all, this book has plenty of well-described sex in it. I think Beth and Wrath got it on around four or five times. I knew the book had it, but I was still a bit surprised the first time I stumbled across it. If you’re into characters getting erections just about every time they’re near a woman, you’re sure to love this.

Recommended to:
Those who enjoy a romance without all the teen angst. Plenty of sex and tough vampires.