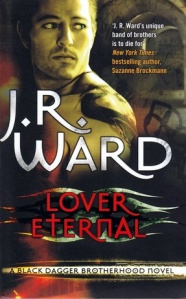 In the shadows of the night in Caldwell, New York, there’s a deadly war raging between vampires and their slayers. And there exists a secret band of brothers like no other – six vampire warriors, defenders of their race. Possessed by a deadly beast, Rhage is the most dangerous of the Black Dagger Brotherhood…

Within the brotherhood, Rhage is the vampire with the strongest appetite. He’s the best fighter, the quickest to act on his impulses, and the most voracious lover – for inside him burns a ferocious curse cast by the Scribe Virgin.

Possessed by this dark side, Rhage fears the times when his inner dragon is unleashed, making him a danger to everyone around him. When Mary Luce is unwittingly thrown into the vampire world, she must rely on Rhage’s protection. Knowing that Mary feels the same intense animal attraction, Rhage must make her his alone…

Final Thoughts:
Even better than the first book. Rhage brings a hot new perspective to the Brotherhood’s world. Deep characters, plenty of angst, and heaps of steamy vamp sex.

The second book in the series brings a new brother to the center of it, Rhage, the man most likely to get off at the bar at least three times before his drink is even served. Tall, blonde and monstrously hot, Rhage has no trouble attracting the ladies, a fact which his brothers never forget to ride him about. Dubbed ‘Mr Hollywood’ or simply just ‘Hollywood’, he sleeps with as many women as he can, then wipes their memories leaving them spent, wondering what happened. In book one, this is about as much as we learnt about Rhage, leaving him as a shallow, incomplete character.

Lover Eternal makes up for that in spades. I thought I enjoyed Wrath’s story, but I didn’t know what I was missing. Rhage is such a tortured character. Sentenced by the Scribe Virgin to two-hundred years cursed by the dragon, he’s forced into having meaningless sex as often as possible to keep it at bay. Either that, or let the giant scaly dragon escape from within and go on a murderous rampage. What Rhage really wants though, is to find love, someone to lie with and hold them tight, not having to wipe their minds clear as soon as the deed is done. After a chance encounter, a human women, Mary, comes into his life and somehow, eerily calms his beast. He must have her.

I really liked the side-story this time around. Here we meet, John, a scrawny, young mute-boy close to his transition. He’s had a hard life, which felt quite convincing. Being unable to speak would make anyone feel distanced from the world, adding in a lack of familial support would make it even worse. I actually teared up along with him. There is so much emotion is this book, not just from John. Characters are pushed to the brink. Even the self-professed ‘psycho’ of the Brotherhood, Zsadist, starts to come through in a new light. His story is next in the series, and I’m eagerly looking forward to it.

It may sound like it’s all romance, but there’s still action going on. The Lessers, de-souled humans who hunt vampires, are back, this time centring around Mr O. He brings quite a different perspective to that which Mr X gave us last time. Mr O is only new to the Lessers, but has quickly risen in the ranks. He’s not as hard and psychopathic as X was, actually showing some signs of his humanity. I didn’t mind these scenes this time around, they weren’t as protruding. However, I’d still prefer if the Brotherhood didn’t have to keep looking over their shoulders all the time.

Recommended to:
Those who love vampire-romance, erotic-fiction and an over-abundance of turmoil.