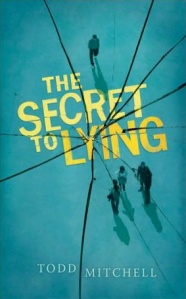 James was the guy no one noticed — just another fifteen-year-old in a small town. So when he gets into an academy for gifted students, he decides to leave his boring past behind. In a boarding school full of nerds and geeks, being cool is easy. All it takes is a few harmless pranks to invent a new James: fighter, rebel, punk. Everyone’s impressed, except for the mysterious ghost44, an IM presence who sees through his new identity. But James is riding high, playing pranks and hooking up with luscious Jessica Keen. There’s just one thing awry: he’s starting to have vivid dreams of being a demon-hunting warrior, a thrill that is spilling over into dangerous and self-destructive acts while he’s awake. As he’s drawn deeper into his real-life lies and his dream-world conquests, James begins to wonder: What’s the price for being the coolest guy around?

Final Thoughts:
A book about how not to be yourself, and why that’s a problem. There are plenty of bits that are sure to crack you up, but if you’re looking for a light, fun read, this isn’t it.

James is the invisible guy at school, blending into the background, his life feels dull, boring. That is until the principal calls him to the office telling him he’s actually got the potential to go ASMA, the boarding school for smart kids. With nothing in his life to cling to, he welcomes the change and quickly moves away. Desperate not to fall into the shadows again, James starts making up stories of a troubled past, full of fighting and stealing cars. He even gives himself a ridiculous purple and orange dye job to cement his new look.

With his roommate, Dickie, he goes about pulling pranks on the equally prank-worthy two Steves, who may or may not be getting it on in their dorm room. With his new façade, everyone thinks he is a legend, all except the creepy IM person. James keeps getting instant messages telling him that they know he’s a phony. He tries to brush it off, thinking he can continue portrarying the facade to the world and still be himself on the inside, but after a while, even he starts believing the lie.

I didn’t particular enjoy this book. It felt, for a lack of better words, ‘preachy’. The whole moral of being yourself came through loud and clear. What’s worse is that I predicted who was behind the IM’s from the start. I was praying for it to shock me, but sadly no. When it was finally revealed, I actually started smacking the hardcover down against my knee because I so was annoyed. The book as a whole wasn’t bad though, I liked the way the story rounded itself out at the end. If it weren’t for that, I probably would have given it two stars.

There were complete chapters written in msn messenger format (not all of them). I enjoyed those, as it was the only time James was able to be real with anyone. With everyone else, he seemed to fall back into his compulsive-liar mode. Even in moments where it would have been perfect to tell the truth, he goes and makes up more stories to make himself sound ‘cool’. With all of his lies, James was becoming a dark person, although he didn’t see it, his behaviour was a bit disturbing.

The weird demon-hunting dreams that were interspersed throughout the book, felt out of place. I’m not sure if I liked that aspect or not. I am glad though, that they managed to keep me confused as to their meaning up until the end. There were actually really likeable characters too, which helped the book. Dickie and Heinous were a riot, leaving me laughing-out-loud way too much with their wacky lines and antics that my brother’s girlfriend came into my bedroom to see if I was alright (I’m normally a quiet person). It was definitely a funny book, just not my kind of book.

Recommended to:
Those who enjoy male protagonists, typical teenage-guy antics and a greater moral to your story.