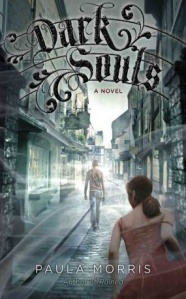 Welcome to York, England.
Mist lingers in the streets.
Narrow buildings cast long shadows.
This is the most haunted city in the world. . . .

Miranda Tennant arrives in York with a terrible, tragic secret. She is eager to lose herself amid the quaint cobblestones, hoping she won’t run into the countless ghosts who supposedly roam the city. . . .
Then she meets Nick, an intense, dark-eyed boy who knows all of York’s hidden places and histories. Miranda wonders if Nick is falling for her, but she is distracted by another boy — one even more handsome and mysterious than Nick. He lives in the house across from Miranda and seems desperate to send her some sort of message. Could this boy be one of York’s haunted souls? Soon, Miranda realizes that something dangerous — and deadly — is being planned. And she may have to face the darkest part of herself in order to unravel the mystery — and find redemption.

I love this cover. Admittedly that’s what first drew me in. From the gothic text, to the bricked alleyway, to that eerie mist… I’ll stop myself there and get back to what’s really important. The story. I haven’t read Paula’s first book, Ruined (which has a similarly designed cover), but it appears from the blurbs that they are standalones, maybe in the same universe, I’m not sure. When I read it was a book set in England, with ghosts, and adding in two mysterious boys, yes it had my interest piqued. There’s only five weeks until this one’s released, so not long to wait now. I’m going to have to remember to pre-order it soon.