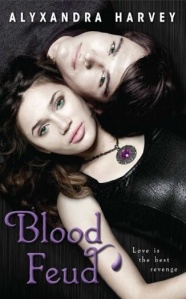 The action and romance continue as the Drakes face a new vampire with a 200-year-old grudge. It’s been centuries since Isabeau St. Croix barely survived the French Revolution. Now she’s made her way back to the living and she must face the ultimate test by confronting the evil British lord who left her for dead the day she turned into a vampire. That’s if she can control her affection for Logan Drake, a vampire whose bite is as sweet as the revenge she seeks.

The clans are gathering for Helena’s royal coronation as the next vampire queen, and new alliances are beginning to form now that the old rifts of Lady Natasha’s reign have started to heal. But with a new common enemy, Leander Montmartre—a vicious leader who hopes to force Solange to marry him and usurp the power of the throne for himself—the clans must stand together to preserve the peace he threatens to destroy.

Final Thoughts:
Better than the first book, a change of POV greatly helped my enjoyment. Logan, the Victorian clothes loving vampire, despite teasing from his six brothers, takes up the lead alongside Isabeau. The adventures are much the same as those from book one, but their strong character traits made up for what annoyed me last time around.

I enjoyed this instalment a great deal more than the first book. No longer are we following the diverging stories of Solange and her human friend, Lucy. Now the POV’s are taken up by Solange’s older brother, Logan and a girl from a rival vampire species, Isabeau. While I did get some enjoyment out of the first book, I found the main characters a little too reckless for their own good and way too angsty. The fact that the two POV’s split off so much also made the book a little hard to connect with. These nuisances seem to have been rectified this time around however. As soon as I realised we were following Logan, I was instantly happy. He was one of the more interesting side characters of Hearts at Stake.

Following on from the aftereffects, the Drakes have now become the new royal family amongst vampires. They’re trying to broker peace between them and the Hounds, a vampire species rich in the ways of magic and thought of as animalistic cave dwellers. Neither species have ever really gotten along; Magda and her sharp possessiveness over Isabeau is a blaring reminder of that. Isabeau is sent as their species’ emissary, thrust into a meeting with Logan because of his certain unique way of dress. He quickly realises that Isabeau is nothing like any of the girls he’s seen before. And it’s those differences that are going to cause a problem for his knight in shining armour routine.

Logan’s only eighteen, however he exudes a great deal more maturity than his recently transitioned sister. If you’ve read the first book, you know that all vampires in the Drake family are born human, but transition into vampirism once they reach sixteen. Logan’s an incredibly charming character. Almost feeling like he was born a few centuries too late, he has a great affection for wearing frock coats and pirate shirts. With a certain suaveness about him, he loves flirting. I liked him already, back when I just thought he was quirky. But getting to know him over the course of the book had me wishing that this was where the series started.

Isabeau (cool name by the way), was a great female lead. She’d groan inside whenever she had to correct someone for calling her Isabel, but she always kept a strong front. She was kick-ass and a complete dog whisperer. I loved the use of dogs in this book, and I’m not even a dog person. We only barely saw Isabeau in the first book, so it was great that we got to delve into her history as much as we did. I admit, I didn’t love the flashback chapters into her human life in late 1700’s Paris at first. I felt like it was taking away from the characters that I wanted to enjoy in the present. But after a while, it started falling into place, and helped to understand how she came to have such a strong resolve. She was probably one of the more fiercer characters I’ve seen, not needing any man to protect her, much to Logan’s initial disappointment, then great delight. He remarks something along the lines of her ruining other girls for him now. It’s fun seeing the guy being the hopelessly head over heels pursuer this time around.

If you were looking forward to more of Lucy and Nicholas or Solange and Kieran, you’ll be disappointed. They are barely in this one, and when they are, it is basically through constant make-out sessions witnessed by Logan. I felt like the plot was a bit rushed at the end again, it really could have been longer with all the strands they were building. But with the great main characters, I enjoyed it nevertheless.

Recommended to:
Those looking for a quick and sweet vampire/vampire romance with lots of scheming and action going on in the background.