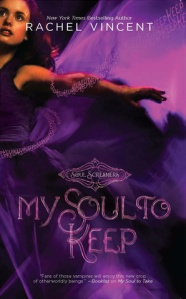 Kaylee has one addiction: her very hot, very popular boyfriend, Nash. A banshee like Kaylee, Nash understands her like no one else. Nothing can come between them.

Demon breath. No, not the toothpaste-challenged kind. The Netherworld kind. The kind that really can kill you. Somehow the super-addictive substance has made its way to the human world. But how? Kaylee and Nash have to cut off the source and protect their friends—one of whom is already hooked.

Final Thoughts:
I don’t know why, but I seem to keep going into these books with low expectations. You know how when you pick up a book and feel like you’re going to have to trudge through it? I have no idea where these feelings come from, but it’s definitely better than going into a book with over-hype. When I get down to it, I actually really enjoy reading the Soul Screamers series and this one was no different. Well, now that I think about it, it was. It was better. That’s always good. You wouldn’t want the series moving in the other direction. I love how each story manages to one up the previous book.

My Soul To Keep revolves around a poisonous demon drug, called Frost, that’s been circulating its way through the jocks at Kaylee’s school. Initially this idea seemed quite tame, but what came out of it, was excellent. If you’re not familiar with the series, Kaylee is a bean sidhe (banshee) who wails with ear-piercing clarity whenever someone around her is about to die. The screaming of a female bean sidhe can be calmed by their male counterpart, of which Nash, her boyfriend, is. Although that aspect seems to take a backseat through this instalment. I’m not complaining though, I’m all for less wailing and a juicier plot.

I managed to pick up on the twist very early on. It wasn’t too obvious, but if you’re paying enough attention you should be able to piece it together easily enough. I admit, I was a little disappointed that I was right, but that quickly changed once I realised how many possibilities that were opening up for us. It’s a great idea. The way plot rolled out, fitted together perfectly, weaving its way through the already established foundations of the first two books. I’d have to say that this is the novel that amps the series up a notch in my eyes. Soon as I finish this review, I’ll be getting straight into My Soul To Steal, no breaks this time for me.

As I’ve said before, I really do love Tod (Nash’s dead-brother-turned-reaper). There wasn’t as much of him as there was last time, but what we got to see of him more than makes up for it. Quality over quantity, right? He seems to be growing as a character, which is what I like to see. Though he’s still a very much a teenager at times. I love his humorous timing. But he feels like a bridge between Kaylee and the adults. There’s been times where I was reading and thinking ‘why can’t they do this?’ and then a few paragraphs later Kaylee would suggest it, and I’d start grinning. I love when characters actually think ahead. What I didn’t enjoy though, was the characters’ lack of obtaining adult assistance, but that’s a fairly general occurrence in YA. I get the reasoning behind the reluctance, and I like that these characters at least think of these things, but really, I’d prefer a little less self-sacrifice.

Sophie, what to say about her. She’s the ultimate high school bitch, and I love her for it. I hated these types in real life, but they can be so much fun in book form. At least here, they can get what’s coming to them. She’s always picking on Kaylee, who she also happens to be cousins with. No familial love there. In this book, Sophie is running for ‘Snow Queen’, but I prefer Kaylee’s reinterpretation of the title ‘Ice Bitch’. Much more fitting. There are some great shenanigans in here. I especially love the encounter with the universal remote.

Finally, back to Kaylee, she’s a great main character. I’ve touched on some of her traits already. Normally I groan at the idiotic things some ‘heroines’ get up to. Unlike them, first and foremost, Kaylee has a brain. Secondly, she actually uses it. She learns from her mistakes and knows when to stand up for herself. She’s definitely not a pushover. I really believe that if the characters are done right, the author can do nearly anything with the plot and make it fantastic. I’ve got an idea where the next book might be heading, so I’m about to see if Rachel can surprise me again.

Recommended to:
This isn’t really like anything else I’ve read, so it’s hard to draw comparisons. If you like the idea of reapers, demons and death, mixed with a bit of high school drama, give this one a shot.