Jul
18
REVIEW: “My Soul To Save,” Rachel Vincent
Posted in "Book Reviews" • 2 Comments 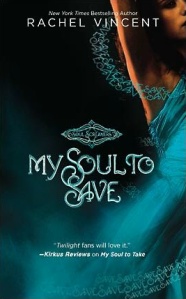 When Kaylee Cavanaugh screams, someone dies.

So when teen pop star Eden croaks onstage and Kaylee doesn’t wail, she knows something is dead wrong. She can’t cry for someone who has no soul.

The last thing Kaylee needs right now is to be skipping school, breaking her dad’s ironclad curfew and putting her too-hot-to-be-real boyfriend’s loyalty to the test. But starry-eyed teens are trading their souls: a flickering lifetime of fame and fortune in exchange for eternity in the Netherworld—a consequence they can’t possibly understand.

Kaylee can’t let that happen, even if trying to save their souls means putting her own at risk…

Final Thoughts:
A great second novel, building on the bean sidhe (banshee)/reaper dynamics built in My Soul To Take. Rather than being swept up in her own budding romance, Kaylee is actually quite selfless, a little too much I think. This one brings a lot of fun and ample tension as the little group takes on an evil corporation stealing their teen stars’ souls.

Where the first novel was more in the getting-to-know-things phase, this one jumps right in with Kaylee and Nash on a date at a pop star’s concert. This world famous starlet just happens to drop dead in the middle of her set, but this time Kaylee’s glass-shattering scream doesn’t come. Usually bean sidhes use their wails to hold onto a soul as it leaves its body, but when faced with a soulless pop star, Kaylee is left mute. Instead this fame hungry girl’s soul is left spending the rest of eternity in the clutches of a demon.

With Nash’s dead, reaper brother hanging around, they stumble upon a soul stealing tycoon with Tod’s ex as his next target. Kaylee and Tod (plus Nash reluctantly), determined not to let another girl’s soul be forever tortured in the Netherworld, set out to find a way around the deal with the devil, so to speak. Their travels aren’t easy however when you’re a teenage girl living with your overprotective, single parent father. Pushing curfews, dodging questions and sneaking around at all hours become a regular occurrence for Kaylee in her attempts to help save someone she barely even knows.

It’s been a while since I read the first book in this series, but I remember enjoying it a lot at the time. My reaction was no different this time. I was actually a little worried as to where this story could go after the first book without falling into repetition. Luckily my fears were unwarranted. Rather than having Kaylee break out into shrieking cries all throughout this book, she actually started learning ways to control her abilities and even harness them. I enjoyed her bean sidhe classes with Nash’s mother, Harmony. She has to be one of the coolest 82 year old mums around.

The romance didn’t feel quite as heavy as I remember last time around. There was too much plot going on around them, which is a good thing. Rather than books that teeter along and save all of the action until the last quarter, with this one, you felt the tension right from the start. With Nash and Kaylee, I enjoyed what forays we got into their love life, but they were a couple definitely in need of a do not disturb sign. For most parts though, we were just left with Nash’s protective embraces and a feeling that they were comfortable together, well most of the time. I didn’t much like Kaylee’s occasional insecurities, but everyone has those so I guess I can overlook that. I just hope that she gains a little more self-confidence in the future.

I couldn’t help loving all of the parallels between the big bad, mindless child star producing conglomerate to a certain mousey company in real life. I’m sure that was Rachel’s intent. The ideas behind the rehab-ridden fallen stars were brilliant. Another thing I need to mention is Tod, I’m completely loving him now. There wasn’t much of him in the first book, so the fact that I got to spend a whole novel with him this time made me enjoy this one more. He’s such a fun character, and seems to have a lot more emotion behind him even though he hides it well with all of his popping in and out of existence at the most inopportune times. I swear I picked up on him hinting some feelings throughout this one.

Recommended to:
Those looking for an action packed story full of reapers and demons. The romance is there but doesn’t distract from the plot.