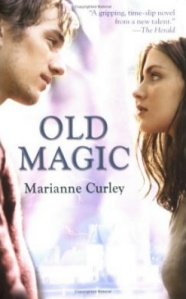 Jarrod Thornton is mesmerizing,
but Kate Warren doesn’t know why.

The moment the new guy walks into the room, Kate senses something strange and intense about him. Something supernatural. Her instincts are proven correct a few minutes later when, bullied by his classmates, Jarrod unknowingly conjures up a freak thunderstorm inside their classroom.

Jarrod doesn’t believe in the paranormal. When Kate tries to convince him that he has extraordinary powers that need to be harnessed, he only puts up with her “hocus pocus” notions because he finds her captivating. However, the dangerous, uncontrolled strengthening of his gift finally convinces Jarrod that he must take Kate’s theories seriously. Together, they embark on a remarkable journey—one which will unravel the mystery that has haunted Jarrod’s family for generations and pit the teens against immense forces in a battle to undo the past and reshape the future.

Final Thoughts:
An annoyingly stubborn and funnily clumsy guy brings a sort of flat first half, full of the lots of running in circles. A surprisingly interesting second half centred on a magical curse improved my feelings as it took on a whole new direction.

In a small mountain town, Kate is one of the twenty-seven Grade 10 students attending the local high school. She’s also a witch. Not a public fact however, but still she’s thought of as the town’s freaky girl due to the occult shop that her grandmother operates out of their house. Kate isn’t powerful, not like the young grandmother who raised her. But she can read people’s emotions, and complete some spells. When a new boy arrives, with the town being as small as it is, he draws everyone’s attention. Awkward, even a little clumsy, Jarrod, is immediately picked on by the class bully. But with the popular girls lusting after him, he quickly gets initiated into the cool circle.

A century’s old curse is lingering over Jarrod’s family though, which reluctantly sends him into Kate’s life. Determined to fit in, hanging with Kate is clearly not going to help that cause. Only ever speaking to her under the privacy of her own home, Kate quickly gets frustrated with Jarrod’s spinelessness. She can’t simply push him away however. Sensing great untapped powers within him, Kate wants him to embrace them like her. But for Jarrod, magic and anything barely paranormal is beyond his realms of possibility. To him, Kate is insane.

The book is split in half, basically feeling like two different books. Part one immediately felt Australian to me, before the characters had even mentioned Brisbane. The high school reminded me of my own, with its quadrangle and outdoor style setting. The cliques were very cliché, the popular people ran both the school and the town, being incredibly rude and mean. The story is told through dual POV’s, switching chapters between Kate and Jarrod. Both are very stubborn. Kate is strong willed in her beliefs, proving very insistent at convincing Jarrod of his magic. But he is so ingrained in his version of what is and what isn’t possible, telling her she’s crazy whenever she brings it up. The fact that Jarrod publicly ignored Kate frustrated the hell out of me. He was a horrible friend, but Kate kept taking it. In Jarrod’s POV, we see how he does care for Kate, even finding her attractive, but he can’t bear standing up for her for fear of falling into unpopularity.

You may want to skip this paragraph as I can’t go into the second part of the book without giving away a bit of the story. The rest of the book is set in medieval Britain, as our two main characters travel back in time in a bid to stop the curse from ever being placed. I noticed that once the characters were in the past, their speech, and even their inner thoughts started to take on the ‘ye old’ language, though not completely. Though even with this change, both characters constantly still used the word ‘cause instead of because. It’s not a big deal, but it just annoyed me. I did like Jarrod’s change though. He actually started to grow a spine and lose his jerkiness as the two of them found their way into an ancient castle full of nobles, knights and their servants.

The magic used throughout the book was minimal, and I felt a little confused as to where the plot was going for a while. The complete change brought about by the second half of the book made up for that however. The characters started having real growth as they pushed through their own struggles. I suppose, Jarrod’s complete lack of belief in the supernatural was actually quite reasonable in reality. I think I’m just used to most books having their characters take the supernatural as fact, pretty much straight away. It wasn’t my favourite book, but I still enjoyed it.

Recommended to:
Those interested in a self-discovery journey with a magical twist.