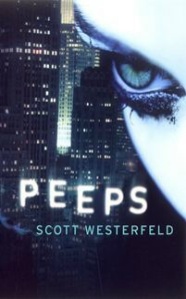 Okay, let’s clear up some myths about vampires. First of all, you won’t see me using the V-word much. In the Night Watch, we prefer the term parasite-positives, or peeps, for short. The main thing to remember is that there’s no magic involved. No flying. No transforming into bats or rats either . . .

After a chance encounter with a mysterious woman one night, Cal’s life is changed forever. He’s been infected with an insidious parasite. The good news: he’s only a carrier. The bad news: he’s infected all his former girlfriends – and now they’ve turned into what Cal calls ‘Peeps’. The rest of us know them as vampires. And it’s Cal’s job to hunt them down, before they create even more of their own kind . . .

Peeps is a very different kind of vampire story. Housed in science rather than the supernatural, people get infected with a parasite through biting, kissing or sex. Once the parasite gets into you, it alters your senses, strengthening them. It also changes how you think, anything you used to love, suddenly you hate. They’re called anathemas. Most people like the sunlight, so once you’re a peep, you’re kind of stuck living in the dark. Love Elvis? Then anything the King related is going to send you screaming. But that’s not what happens to everyone. Some people get the super-strength, but without all of the anathemas and the urge to bite people. That’s what you call a carrier.

Cal just happens to be one of them. After arriving in New York, ready for university, Cal loses his virginity to a woman he can’t remember and unwittingly finds himself infected. A year or so later, after being initiated into the Night Watch, a centuries old organisation that hunts down peeps, he’s almost captured everyone one of his now infected girlfriends. All except the one who infected him. Following a drunken trail toward the mystery woman, he worms his way into an upper-class apartment building. Here he meets a young journalism student who won’t seem to leave him alone, until she finds out what he’s up to.

This has such an interesting premise, bringing vampire-like humans into the realms of possibility. I enjoyed the scientific nature in which the rationale was presented, although I didn’t exactly love the parasite obsession the main character had. Every second chapter split off from the plot giving us a brief history on a lot of different parasites and how they work their way through the food chain. Some of them sound really nasty. It’s all a little creepy, but they do fit into the story occasionally so I wouldn’t go skipping over them or you may be left missing bits.

The fact that Cal’s carrier infection makes him horny all the time, yet he can’t have sex or even kiss without infecting someone else was a great roadblock for his character. I thought that was funny and worked well in providing tension. Cal was a likable main character (a male one at that), but Lace annoyed me a little as the leading female. It felt like every waking moment she’d be using the word ‘dude’, (she’s not a frat guy). I enjoyed her banter with Cal though, it helped balance against science talk. She has a tendency to be pushy, but in a fun kind of way. Eventually the ‘dudes’ grew on me after a while, but it still irked me a bit…

It’s not the reason for my 3 Stars though. I would have liked to have given it higher, but it wasn’t until about 200 pages in that I actually felt like it was really gripping. There was heaps of investigative action going on, with lots of rat swarms other creepy crawlies. The way it all played out was pretty cool, and I wouldn’t mind reading the second book, but I don’t think these will end up in my favourites list any time soon. I did really enjoy Scott’s Midnighters series though.

Recommended to:
Those interested in something different in the vampire genre. Less romance, more action.