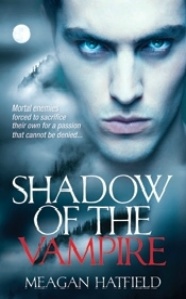 Vampire princess Alexia Feodorovna has been undead for 125 years, so it’s been awhile since any man has made her pulse race. Until Declan Black. One look at his bronzed body and a fire like no other consumes her. Then she discovers that he’s a dragon lord, come to take revenge on the vamps who killed his parents. And claim a crystal said to imbue its owner with incredible powers.

Alexia is ordered to torture and kill the dragon lord. Yet with each reckless encounter, she finds herself consumed by his fiery passion. A passion Declan battles, as well. Will he be able to resist the fire of lust she kindles within him and keep revenge in his heart? Or will he risk everything to quench the burning desire and claim the vampire as his own?

A few pages in and I was going to give up on this one, but I decided to stick through it. It starts off as a war is raging between a clan of cave dwelling vampires and the dragon shifters who live high above. Both are after an ancient crystal that will give them the power to rule over the others. With his parent recently murdered by the vampires, Declan goes in to try and retrieve the crystal his parents died searching for. Unfortunately, on his getaway, he’s attacked and captured by Alexia, the vampire queen’s daughter, and locked away in their underground dungeons.

Determined to get the crystal back, Lotharus, the vampire queen’s wicked and ever plotting advisor, turns to beating the details out of Declan. Silver, deadly to a dragon, is his weapon of choice. Alexia, setting out to retrieve their required knowledge, is prepared with daggers in hand, but instead of using them, she finds herself inexplicably drawn to the incredible sight in front of her. Unlike the gaunt men she’s known all her life, Declan is broad, built, and unmistakably naked. This leads to a romance between both captor and prisoner as the warring species can’t seem to deny their passion toward one another.

I’ve never read anything with dragon shifters before so I wasn’t quite sure I’d like this, but once I was a few chapters in, it seemed completely natural. Declan is different to other dragons, he also has fangs which leads to a lot of bloodsucking back and forth between him and Alexia. While the ongoing war between the vampires and the dragons is the catalyst for the plot. The actual story centers around the maniacal scheming of Lotharus, as he tries to cling to any shred of power he can get. I really hated him, he was despicable in every sense of the word. Whenever anyone managed to land a blow on him, I couldn’t help but smile.

For a good two thirds of the book, Declan was completely naked, except for the blood and dirt caked on him. We’re constantly reminded of how hard he is and his intense need to be with Alexia. There is plenty of steamy sex, but be prepared for heaps of interruptions. It seemed like whenever they were about to get to it, someone would appear, driving them back into hiding by their roles their species have dictated for them. The book shifts POV quite a lot, showing us inside the different character’s heads. It tends to stick to the main characters most of the time, although we do get the occasional side character taking over.

While this is an erotic novel, the sexual tension is backed up by an interesting paranormal plot. There’s lots of action too, as the main two don their leathers and kick ass. There weren’t too many twists however and I was left feeling like it could have gone for a little longer. There were multiple side plots set up, but they didn’t quite get a full resolution. The main story felt complete though. It’s good for what it is. So if you’re just looking for a hot romance, you’ll be happy; Declan’s tail does come in handy quite a few times.