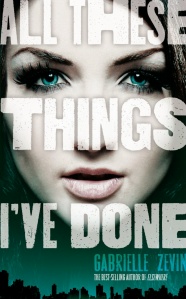 It’s 2083. There’s a chocolate prohibition, and New York City is a very changed place. Art museums are now dance clubs, books are musty relics of the past, water is strictly rationed, and the mafia ruled black market consists of chocolate and caffeine.

And yet, for Anya Balanchine, the sixteen-year-old daughter of the city’s most notorious (and dead) crime boss, life is fairly routine. It consists of going to school, taking care of her siblings and her dying grandmother, trying to avoid falling in love with the new assistant D.A.’s son, and avoiding her loser ex-boyfriend. That is until her ex is accidently poisoned by the chocolate her family manufactures and the police think she’s to blame. Suddenly, Anya finds herself thrust unwillingly into the spotlight – at school, in the news, and most importantly, within her mafia family.

Final Thoughts:
I loved this book. But you could probably already glean that from my five star rating. I don’t hand those out often, so you should know that this one was worth it. Sure, it’s probably going to be known as the ‘chocolate dystopian’, but that’s not what makes this book so good. It’s the wonderfully written range of characters that bring this story to life. All the rest is just a… well, not-so-pretty background to the life that is Anya Balanchine.

Set about seventy years in the future, the world is deeply lacking in natural resources. Books are no longer printed, clothes have to be repurposed and the water supply is all but gone. Law enforcement is overwhelmed and possibly corrupted as the government constantly changes laws in order to maintain control over society. Chocolate and caffeine just happened to sneak onto their prohibition radar. Anya’s family, being one of the big chocolate distributers, effectively became part of the black market with the law change, making her a mob boss’s daughter. A now dead mob boss’s daughter.

Anya, Anyaschka, Annie, whichever name you’d like to call her, has to be one of the strongest female characters I’ve come across. She has so much to deal with in her life and she’s only sixteen. She’s not fighting demons, she’s fighting the real world problems life has thrown at her. Although her grandmother is still there, she’s old and bedbound, leaving Anya to run the household. As I’ve mentioned, rather than being about the chocolate, this really is a story about family. There are plenty of struggles for Anya which would have broken anyone else in her place, but somehow she’s managed to hold herself together. I really admire the strength she puts forth, both in actions and appearance, and the utter selflessness she endures to keep her family safe.

The characters are easily identifiable, although that doesn’t mean they are simply flat and pigeonholed. Each has more lurking beneath the surface that we get to experience as the book progresses. When you first meet them, Natty’s the fun, ever inquisitive, boy crushing twelve year old sister, who wishes she were older. Leo is the easily upsettable, older brother, who was left with a childlike mind after a car accident years ago, while Anya is stuck in the middle, left playing the parent to both of them. Leo was a touching character, which I think came across really well throughout the story. The dialogue and the emotions that came with it felt real. This is one of few books that managed to wet my eyes.

It’s not all hardship though. There’s Win, who I adored. If you check out my teaser I posted a couple days ago, you’ll find one of my favourite quotes of his. He manages to pull off the witty, sometimes ludicrous banter without coming across as egotistical or standoffish. He has the caring thing down, almost to the point of being peculiarly in sync with Anya. The number of times that he just happened to be in her apartment had me grinning. It’s something I really enjoyed. I love that he knows when Anya needs him and is able to break through the emotional walls she fronts herself with. He has a forthrightness to him that I appreciate in a character. Plus, his use of the term ‘lass’ for no apparent reason other than he felt like it was swoon worthy. Another point in Anya’s favour though, was her distaste for people using ‘I love you’ lightly, she has the sense to realise that love doesn’t come instantly, and neither does sex.

I said it was a story of family, but it’s also one of politics. I suppose the two are intertwined and you can never really separate them. Coming from a mafia family, Anya and the law don’t exactly mix well though, yet these links can’t be ignored. I won’t spoil you with the details, read this book! There’s lots of mystery and tension keeping you flipping through to the end. Although I wouldn’t describe it as the aggravating kind of angst some books manage to exude. The romance, high school issues and emotion provide a nice balance to the desolate world of crime Anya lives in. There had better be a second book coming soon, because I don’t want to leave this world of Zevin’s just yet.

Recommended to:
Those seeking a gateway dystopian. If you enjoy family dynamics, strong females and an adorable romance, you’ll love All These Things I’ve Done.