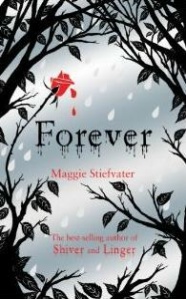 The thrilling conclusion to #1 bestselling Wolves of Mercy Falls trilogy from Maggie Stiefvater.

In Maggie Stiefvater’s Shiver, Grace and Sam found each other. In Linger, they fought to be together. Now, in Forever, the stakes are even higher than before. Wolves are being hunted. Lives are being threatened. And love is harder and harder to hold on to as death comes closing in.

Final Thoughts:
I feel like I need to go snack on a block of chocolate after this one. My emotions are on shaky ground, like someone’s stomped on them, sewn them back together and then backed a car over them. I separated my reading into three sessions. The first quarter on Thursday night, the middle Saturday night and then finished off the last quarter Sunday morning. I think that was the right way to do it, this book is a giant ride where you need to pause and enjoy the scenery as so much happens that it could feel like a blur if you were to rush through. You also need to choose your resting points wisely or you could find yourself losing sleep worrying about what Sam and Grace were getting themselves into.

Being the final book in the series, you have lots of expectations of what you want to happen for the characters. Of course you want a happy ending, but if the book were to go ‘Grace and Sam snuggled under the blankets and all was right with the world,’ it would be a reasonably boring kind of book. Grace and Sam snuggling and their undeniable closeness were probably what made me love Shiver, but that was book one. Linger brought with it the trials of Grace’s struggling body and her parents disastrous attempts at remedying their lack in parental oversight. Oh and then there was Cole too, but I’ll get to him later. In the closing book of the trilogy, it needed more than love and its struggles, and I can safely say we got it.

There was so much going on this time as the noose started closing in. The cliff-hanger that the last book left on occupied the first hundred or so pages. I enjoyed the anguish from Sam’s perspective this time as he dealt with Grace’s absence with Cole’s antics as his only source of company. There was a perfect male bonding scene between them though, which had Cole winning me over. He tended to annoy me during Linger, but he felt like a new version of himself this time around. His personality was still there, I absolutely loved his phone messages for Isabel which ranged from snarky to corny to needy. He came across as more driven this time, and I guess more willing to let people in.

Asking me to pick favourites now would be torture, as each of our four leads have grown into addictive characters that you can feel real connections to. While sometimes multiple POV’s can leave you wishing parts of the book would hurry up to get you back to a particular character, I found myself enjoying all of it. I did mention that Grace had become whiny during the last book, although I found that particular trait had vanished this time around, much to my appreciation. Here, her and Sam were very much acting older than their age, as they dealt with the greater threats closing in around them.

I liked that Grace’s parents were given some greater depth as to why they are the way they are. Although I’ll never think of them as being great parental figures, I do have less malice towards them then what I felt during Linger. I think this book was really a time a growth all round. There are tough decisions to be made and dire consequences for making the wrong ones. Putting my feelings for Forever into words is hard, it would be a lot easier if we could all shove mental images like the wolves can.

I would love to see this series in movie form someday. There’s so much romance, both the undeniable, I-need-you kind and the slow burn of lust becoming more, and then there’s the inner struggles, dealing with bad parents, flat out fighting, suspicion, deception, betrayal and topped with great action sequences. Plus, I’d love to see a floppy haired guy singing Summer Girl. Now as I go find that much needed chocolate, I’ll leave you with this: The Wolves Of Mercy Falls is a series I’m so incredibly appreciative that I was introduced to it. I’ll definitely be reading more from Maggie Stiefvater.

Recommended to:
Have you not just read my review? For reasons to read Forever, see my last paragraph.