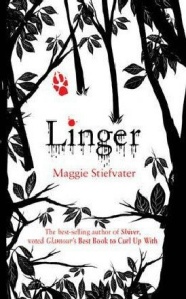 Grace and Sam found each other, and now, they must fight to be together. For Grace, this means defying her parents and keeping a very dangerous secret about her own well-being. For Sam, this means grappling with his werewolf past . . . and figuring out a way to survive into the future. Add into the mix a new wolf named Cole, whose own past has the potential to destroy the whole pack. And Isabelle, who already lost her brother to the wolves . . . and is nonetheless drawn to Cole.

At turns harrowing and euphoric, Linger is a spellbinding love story that explores both sides of love — the light and the dark, the warm and the cold — in a way you will never forget.

Final Thoughts:
Having just read Shiver two days ago, I feel like this one let me down slightly. Don’t get me wrong, I loved the book, it’s just that this time around Grace and her parents started to annoy me a little. I raced through Linger a lot quicker than I did with the first book. The on-edge style plot had me getting very little sleep as I kept on telling myself one more chapter, until 3am reared up on me and I just had to force myself into shutting the book.

This time around Sam is now human, cured of his werewolf curse, and Grace is, well, sick. Persistent fevers and bloody noses are taking over Grace’s life. Sam is trying to adjust to the prospect of a future, one that he thought he’d never get. Their relationship however is put under restraints as Grace’s parents start to crack the whip on her. Meanwhile, Isabel and a recently turned werewolf, Cole, both with strong personalities, are stumbling into to each other’s lives.

As you can probably guess, now we have four main characters, split through the book in their respective POV’s. I really like the introduction of Isabel’s and to a lesser extent, Cole’s POV. Isabel really grew on me throughout the first book with her seeming lack of a filter. She says what she wants, regardless of whether or not other people want to hear it. Sometimes the things she says can come across as mean, although as we learn through her perspective, she really does care about people in her albeit strange sort of way.

Honestly I didn’t like Cole at first. I think it took about three hundred pages into the story before I started to find him sympathetic and redeemable. He’s incredibly forthright, like Isabel, which is probably why they gel so perfectly together. Although unlike Isabel, Cole has a mean streak to his snarkiness that verges on vindictive. I like him now, which I think is a sign of good character growth, or maybe just my ability to put up with him. I’ve heard he’s a lot more likeable in Forever, so we’ll see what I think then.

Like I mentioned in my review of Shiver, the parents weren’t exactly ones I’d be nominating for any awards. Although unlike then, it seems they’ve been flipped into the complete opposite of extremes. Before they were distant, almost uncaring and now they’ve been replaced with mega-parents, hell bent on destroying their daughter’s chances at a relationship. I was slightly annoyed about this as it reduces the amount of on page romance, leading to lots of pining. But on the plus side, it keeps things from getting stale, as the characters have to be creative in finding their smoochy-time. I loved the dynamic between Isabel and her parents, as the Culpepers put the Brisbanes’ antics to shame. Isabel actually goads her parents into arguments for the fun of it, then leaving them behind amidst the mess.

Grace devolved into a whiny/petulant character at times which is something I can’t stand. It wasn’t all the time, she had her moments of clarity, but it irked me enough not to give this five stars. I think having the extra POV’s helped balance this out. This time the plot shifted away from the temperature aspect. Instead of rushing into heated cars or darting for the house, this involved lots of non-talking. What I mean is that, all the characters seemed to have some idea of the issue going on, but were very much into avoiding the subject. That is, except for Isabel. Another point for her! The ending played out a little differently from how I expected, but there is a sense of foreboding to each of these novels.

Recommended to:
Those who love snarky, almost abrasive characters, longing characters and downright lovesick characters. If you’re looking for a werewolf series with less wolf and more of their human struggles, this is for you.