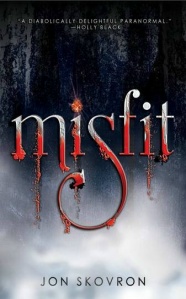 Jael has always felt like a freak. She’s never kissed a boy, she never knew her mom, and her dad’s always been superstrict—but that’s probably because her mom was a demon, which makes Jael half demon and most definitely not a normal sophomore girl. On her sixteenth birthday, a mysterious present unlocks her family’s dangerous history and Jael’s untapped potential.

What was merely an embarrassing secret before becomes a terrifying reality. Jael must learn to master her demon side in order to take on a vindictive Duke of Hell while also dealing with a twisted priest, best-friend drama, and a spacey blond skater boy who may have hidden depths.

Final Thoughts:
From the minute I found out this was a young adult book about demons, I knew I had to read it. Usually they’re portrayed in a negative light as the big evil that often needs to be destroyed. I don’t have a problem with those kinds either, in fact I love Sam and Dean’s demon hunting antics on Supernatural. But here we’re met with Jael, the daughter of a demonic succubus and a mortal priest-in-training. Great combination, right? I thought so. Religion plays a part throughout this story, but it’s not done in a way as to shove it down your throat.

Basically, Jael is a halfbreed, so she’s both a demon and a mortal. But she’s been raised solely as a mortal and is only just coming into her powers after her sixteenth birthday. I’m not sure what it is, but a lot of fictional teens seem to be getting magic at that age, I think all I got was an iPod. Anyway jealousy aside, being a halfbreed is seen as taboo to the power-hungry higher ups in hell, possibly for fear that one may end up more powerful than them. Hence, Paul, Jael’s mortal father has kept her constantly moving around the world, taking refuge with the church, to keep her from being killed.

Even though it’s stated that Jael moves a lot, I liked that we weren’t thrown right into a brand new town with the getting-to-know-you phase taking up all of the possible plot time. Another upside to having established relationships among the characters is the absence of insta-luv. The foundations are there, allowing things to grow naturally. The romance is actually really minimal throughout the book, but I still found it enjoyable. Rob is anything but a typical love interest. Okay, so he’s got the blonde thing going, but he’s also a fun and chatty skater guy, while additionally a bit of a science geek. No brooding in the shadows from him. Even though it wasn’t hot and heavy with kissing every page, I really got into the easy-going/playful vibe he had going for him.

The best friend on the other hand, was another story. I’ve got a friend Brittany, who remarks that there are never any nice girl types with her name in fiction. I guess she can add another one in support of that thesis. This one, who’s often shortened as Britt, was a barrage of contradictions. She was blonde and a little vapid, more obsessed with boys than her own dignity. She seemed willing to throw around sex like a sampling plate at a donut shop. But at other times, she could be a devout Catholic school girl, god fearing, right down to the homophobia. So how Jael and her fit as friends, I’ll just have to chalk that one up to the mysteries of young adult.

While I didn’t like Britt, her presence didn’t ruin my enjoyment of the book. The demonology and the discovery of magic are the forefront to the story anyway. The mention of Gaia and the five elements had me remembering my childhood watching Captain Planet, although the plot here bares little resemblance. There is a mentor, but he resembles more of a fish-man than Mother Nature. I liked Jael’s ease when it came to embracing her demonic heritage. She had strength of will, but unfortunately she wasn’t free of YA curse of making bad decisions. Although with the trigger happy irrationality of Jael’s father when it comes to moving, I could find myself agreeing with some of her choices, even if they weren’t always for the best. I mean what sixteen year old wants to move in the middle of high school.

The book splits between the past and the present, which normally would have annoyed me, but I actually found it really interesting. The present and main plot is told through Jael, while the past is seen through her father back in his early twenties. Skovron did really well in making me love both the adults and the teens. Getting to know what has made characters the way they are was really helpful in connecting with them, especially when Jael’s present day father has the emotional capacity of a french fry, not that he’d let Jael eat one. Although I wasn’t shocked by some of the later twists, I was satisfied with how everything played out. If it turns into a series, I’ll be coming back for more.

Recommended to:
Those looking for a paranormal romance/coming of age story, without all the vampires, werewolves etc. Demons are the new angels.