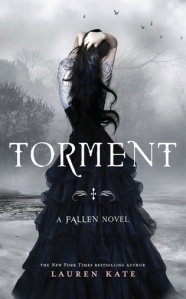 That’s what it’s like for Luce to be apart from her fallen angel boyfriend, Daniel.
It took them an eternity to find one another, but now he has told her he must go away. Just long enough to hunt down the Outcasts—immortals who want to kill Luce. Daniel hides Luce at Shoreline, a school on the rocky California coast with unusually gifted students: Nephilim, the offspring of fallen angels and humans.

At Shoreline, Luce learns what the Shadows are, and how she can use them as windows to her previous lives. Yet the more Luce learns, the more she suspects that Daniel hasn’t told her everything. He’s hiding something—something dangerous.

Final Thoughts:
This isn’t the book I was expecting. Rather than following on from the action-packed plot that we finally got to in the final quarter of Fallen, here we’re thrown into a new school, new characters and Luce. That’s it. Everyone else from the first book is gone, so it’s like starting over again. Only this time, it’s on the complete opposite extreme. Shoreline, possibly named after the cliff edged beach the school borders, is nothing like Luce’s old school. Gone are all the prison-like qualities of Sword and Cross, replaced by laptops with free wi-fi for all and extravagant breakfasts on the terrace.

Okay, so I probably already sound like I hated the book, but I actually didn’t. Yes, I was annoyed at the changes, and some of the character developments, but I still found it an enjoyable read. Had the book regressed to a complete lack of the paranormal, I would have been spitting. But no, it rectifies that by infusing Luce into a sort of ‘angel training’ school masquerading as an elite boarding school. Surrounded by Nephilim who’ve grown up hearing the ‘Daniel and Luce’ epic love story, Luce’s arrival makes her a celebrity among the students, at least with some of them.

I have no idea how this girl manages to make friends so easily. It seems people just attach themselves to her wherever she goes. This time around, Luce has Shelby, her sometimes bitchy, always grouchy, yoga loving roommate, and Miles, the guy who’s always there to cheer her up, give his support or just to flash her his cute dimples. Yes I liked Miles. Even with my annoyance at the lack of first book characters, I still managed to enjoy the antics we got with the new ones. It helped that a lot more happened during the course of this book, rather than piling it all toward the end like the first one did.

Daniel was frustrating throughout Torment, making the title an apt one. I get the whole ‘I can’t say anything because of the rules thing’, but the way Daniel goes about it is all wrong. Firstly, dumping your girlfriend at a boarding school where she knows absolutely nobody and telling her to stay there because it’s for her own good, is not a good enough reason. And secondly, treating her like child, issuing orders at her, that’s a big no-no. I don’t care how great a kisser he is, if he’s going to act like a douche, he deserves to be kicked out to the kerb… there’s always Miles.

I think I need to mention the changes in Luce as well. She’s venturing into Nora territory and that’s not a good sign. The fact that she’s aware of Daniel’s poor behaviour, yet puts up with it just because she’s in love, makes it even worse. And the situations she gets herself into, I shake my head at that. Against all better judgment, she leaps into the face of danger. Yes Nora, no I mean Luce, I get it, you’re free spirited, now slowly step away from the creepy shadow thing and no one will get hurt.

Okay, so I guess I came across a little harsher than I meant to be. Torment isn’t bad, it’s just one of those books you have to be in the mood for. It’s fun, escapism and a little bit snarky. I love the banter going on. There’s such a wide berth of personalities among the characters, making it hard to pick sides at times, much like the angels themselves. Lauren’s thrown us a few cookies along the way, but nothing too ground breaking. I won’t spoil anything, you’ll know once you come across them. I’m not quite sure where Passion is going to lead, but I’ll be checking that one out soon enough.

Recommended to:
Those who enjoyed Hush, Hush and Crescendo. This one would easily fit in among those. Angst+Angels=Torment.