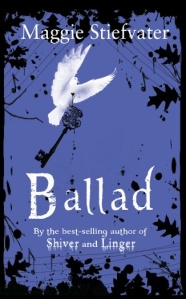 When his best friend, Dee, fell in love with a faerie, James realized she’d never feel the same way about him.

Trying to escape into music, James joins a private conservatory for musicians. James’ musical talent attracts Nuala, a soul-snatching faerie muse who fosters and feeds on the creative energies of exceptional humans until they die. Before he knows it, James is trapped in a dangerous game. One where the only way to win is to betray the one you love…

Final Thoughts:
Ballad feels more like a companion novel rather than a sequel. Sure it follows on from the aftermath of Lament, although it does so in a way that reinvents the world in which we’ve grown accustomed to. Dee is no longer in control as her best friend, James, takes the lead. In fact, Dee is barely visible now and when she is, she’s utterly frustrating. With James’s POV, we get to experience a witty character from the inside. Someone who was once an endless supply of one-liners is now full of struggles and emotion. Rest assured though that there is still enough romance going on, only in a different way.

Having James in small doses throughout Lament was completely different to experiencing him first hand over the course of a full novel. Switching perspectives mid-way through a series can seem alienating, although I think it was handled in a way that kept the series fresh and just as addictive. This time around, we’re met with a wonderfully multi-layered character, who in my opinion, was a much better lead than Dee managed to be. Dee and Luke spent so much time together in insta-lust, that it feels vastly different reading this series in their absence. I found I had to separate my expectations in order to appreciate what Maggie was giving us with this instalment. The fact that I already loved James to bits before coming into this made the adjustment easier.

Now that the characters are actually attending school, we’ve got the classes, evil teachers, friendly teachers and then the students to contend with. Although Thorn-king Ash isn’t just any school, it’s a boarding school for the musically gifted. Think Raise Your Voice, but with a heap of evil faeries hanging around. Boarding school books can be a bit iffy for me, yet this one had me hooked. The dynamic between James and his teacher was just too much fun. I couldn’t imagine anyone in real life saying some of the things he did. I also loved the Britney Spears inspired roommate bonding session. Paul was the awesomely hilarious without intending to be, yet understated friend to James.

James himself, as I’ve mentioned, was very different from how I had pictured him in Dee’s eyes. And that’s a good thing. While I loved his antics before, actually seeing the way his mind works was so much better. James is such a talented piper, and he knows it too. He never fails to show his own ego. But James has a lot of inner turmoil going on which he covers up through his humour. It’s not that he pushes people away. He makes friends easily with his seemingly filter-less attitude. It’s more that he acts in such a way as to guard himself from further pain. He gives off a sense that he doesn’t particularly care about anything, although inside it’s quite the opposite. I love broken characters, so I really enjoyed seeing his OCD tendencies develop throughout the book. I thought they were handled well.

Dee. I shudder thinking of her. I liked her in Lament, but after reading this I’ve started to wonder why. It was like her character took a nosedive. I felt like screaming at her for some of her actions, or inactions. She became a horrible version of herself. Even though Dee was hardly in the book, I hate to say this, but that was still too much. I do think though, that her particular actions were needed as a catalyst to bring the story into what it was. Taking on the leading female role, and splitting the book’s POV duties with James, was Nuala. Unlike Dee, Nuala was very sure of herself and held her own in the snarky comments department. Being a faerie, one who feeds on those ‘young, talented, and male’, it gave this book the star-crossed feeling again. But what I feel made it better though, was that James, unlike Dee, didn’t try to hide in any self-delusions that ignoring the issue would make it go away. James has a bluntness to him that worked well with the hard edge Nuala held on to herself.

Of course there is lots of romance along the way, but one that’s paced properly, not rushing into anything too soon. There are tender moments where thoughtfulness comes across stronger than simply having a kissing scene. Like in Lament, the faerie aspects felt like they had been pushed to the background again, leaving the characters and their problems to hold the majority of the plot together. This isn’t a bad thing though, as in Maggie Stiefvater’s signature style, Ballad has that ever-present foreboding hanging over the characters leaving you terrified that everything’s going to fall apart, but praying that it doesn’t. All I can say is… you’ll have to read this book to find out.

Recommended to:
Those looking for a faerie-human romance, but with a broken male protagonist with an abundance of snark and a tendency to draw on himself with magic marker.