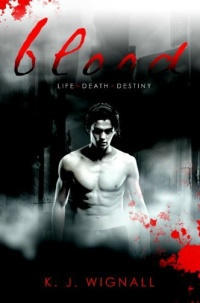 “I do not remember being bitten. I wish I did, for then I would know the creature who did this to me and I would have a purpose, to track him down and repay him for the poisoned gift he gave me.”

Back in the 13th Century, Will was destined to be Earl of Mercia. He never lived to inherit his title, struck down by a strange illness and buried beneath the city walls. But Will was not dead, and only now, seven lonely centuries later, does he begin to understand that there was a reason for all of this, that he has a destiny. To find it though, he will need help, and as ever, he will need blood.

Final Thoughts:
Slightly too slow paced with the romance, but fast paced in terms of plot. Here a previously hibernating vampire is thrust into an unexpected destiny. Full of culture shock and lots of sword action. I enjoyed the different take on the lore and was relieved to have found a vampire unopposed to drinking blood, but unfortunately wasn’t thrilled with the level of coincidence used to bridge the plot together.

Blood has an interesting take on vampires. I enjoy finding differentiations to the lore what with so many vampire books available at the moment. Will is edging on eight hundred years of age, yet he’s slept through most of them. Forever sixteen, with large canines he files away, Will emerges from lengthy bouts of hibernation decades and sometimes centuries apart. While a lot of the familiar vampire trappings are still apparent throughout this novel, they’re used in alternate ways. Will for one likes to slice open his victims when feeding rather than use his fangs.

There aren’t that many characters in this book, instead we see lots of internalisation from Will as he regards how differently his life should have been, had he not be cursed as one of the undead. The language used has an old style flair to it, although it’s still easily readable. Switching between first and third person narratives did become a little confusing. I would have preferred it to have stuck to one rather than the constant alternating. Thankfully it doesn’t occur within chapters. That would have been frustrating.

With Will’s old fashioned dress sense and formalised speech, he gives off a mature vibe more akin to his advanced age. That’s where the other main character comes in. Eloise gives the book its modernity. I liked her ability to stand up for herself, not backing down on her beliefs, although she did annoy me slightly with her tendency to put herself in harm’s way more often than not. Her banter with Will was probably a highlight for me, constantly needing to explain things to him. Having been locked away from the world since 1989, Will experiences plenty of opportunity for culture shock upon entering the new millennium.

A lot of time goes into explaining Will’s old life, both before being bitten and after, full of kings and earls, and attacks of the plague. I felt that some of this slowed the book down, although it did serve its purpose in giving Will his matured voice. Much of his emotional baggage is also brought to light through these flashbacks. When it came to the front running plot though, I found that some things fell into place a little too easily. There is still a sense of mystery throughout, but most things I had expected generally came to happen. I like where it’s headed though, planting foreboding ideas of destiny and greater evils.

On the romance front, the interactions between the characters were a little too disconnected. Much of that though, was due to trappings that had been placed in their way by the lore. It does provide for tension, but it didn’t produce enough of a spark to make me fall in love with either Will or Eloise. I didn’t hate the characters, in fact, they were quite enjoyable. I just feel that for all of their alone time, we really weren’t given much. I do appreciate the subtle moments, although I’m not sure I have the patience for such a slow burn relationship. Hopefully things pick up with the second instalment.

Recommended to:
Those interested in reading about ancient vampires and long standing destinies.