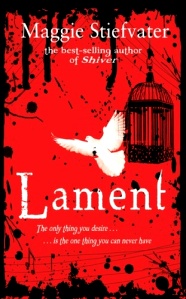 Sixteen-year-old Dee is a cloverhand—someone who can see faeries. When she finds herself irresistibly drawn to beautiful, mysterious Luke, Dee senses that he wants something more dangerous than a summer romance.

But Dee doesn’t realise that Luke is an assassin from the faerie world.

And she is his next target.

Final Thoughts:
I haven’t read a lot of faerie based books yet, so I I’m not as well versed in the faerie lore. That being said, I did find the world of Lament easy enough to follow. It’s not a book centering on the fae politics, rather it takes to the characters on the fringe of that world, exploring the undeniable chemistry between a pair of, and I hate to phrase it like this but, ‘star-crossed’ individuals. A little cliché? Yes I suppose. Anyway, ignoring that fact, the romance here is addictive, and the characters tortured. Sounds like another bout of Maggie Stiefvater fun to me.

Like her Wolves Of Mercy Falls trilogy, Lament features a lot of musical exploits, even more so I think. Dee is a sixteen year old, harp stroking, singer whose mother suffers dearly from helicopter parenting. She’s always being pushed into performances, used as a bragging chip against her mother’s obnoxiously successful sister. Music in books is starting to interest me. While I haven’t been a fan of poetry in particular, I have enjoyed all of the song lyrics Maggie’s books have been giving us. These ones fit in, building into the plot in their vague rhyming ways.

Besides Dee, we have our other two main characters, Luke and James. I love both of them, but in different ways. James has been Dee’s best friend, her only friend, for years. He adorns his bagpipes proudly and brings a smile to my face in each and every scene he’s in. He’s not even the love interest and I still find him amazing. He has a perfect blend of sarcasm and uber-quick wit. He’s caring and understanding, and fits in to social situations with ease, his thoughts sometimes leaking off into wild tangents. I have to say his lines just make me want to hug the book. Once he started rambling about the whale, I was sold.

Luke was a little hard to pin from the start. I feel like he’s an amalgamation of Cole and Sam, although that’s not to say he doesn’t hold his own. From the first meeting between him and Dee, things were strange, although that did seem to be the intention. Luke was just there, seemingly out of nowhere and Dee went along with it, caught up in her insta-lust. There were a lot of unanswered questions throughout the first half of the book. I liked the air of mystery to it, but it did feel strange that Dee would simply go along with him, avoiding her instincts, just so that he wouldn’t leave her if she pushed him for answers.

I read the book quickly though and I found it only got better as I progressed into bulk of the plot. Dee is actually smart, even though that may sound contrary to my prior paragraph. I like how she uses her knowledge of faerie tales and folk lore, matched with persistence to try and unravel the mystery behind Luke and the magical awakenings in her life. I couldn’t help but love Dee’s neuroticism in scooping the perfect ice cream sundae. It was completely random, but endearing as she took pride is her masterpiece. I think she took it as a sign of her own control, something which she lacked in her everyday, parental guarded life.

The four leaf clover idea used was interesting, as well as Luke’s secret (multiple meanings implied). Luke’s vagueness from the beginning was annoying, but it fit well into the story. He played his role as the tortured love interest, masking himself behind cockiness with an undertone of affection in the adorably cute guy kind of way. Lament shook me with twists and turns where I thought there’d be none. I gasped and flipped through the pages desperately. There is definitely a lot of inner strength oozing through the pages. Everything flips into gear, with stakes higher than I expected for the first book in a series. If Lament is anything to go by, I can’t wait to start Ballad.

Recommended to:
Fans of the faerie genre, or those seeking to get into it. There is a rich band of characters, each with musical influences. If you enjoyed Maggie’s werewolf series, and haven’t already read this, what are you waiting for?