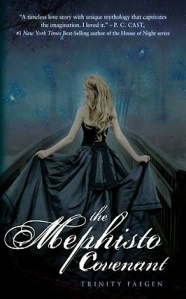 Sasha is desperate to find out who murdered her father. When getting the answer means pledging her soul to Eryx, she unlocks a secret that puts her in grave danger—Sasha is Anabo, a daughter of Eve, and Eryx’s biggest threat.

A son of Hell, immortal, and bound to Earth forever, Jax looks for redemption in the Mephisto Covenant—God’s promise he will find peace in the love of an Anabo. After a thousand years, he’s finally found the girl he’s been searching for: Sasha.

With the threat of Eryx looming, Jax has to keep Sasha safe and win her over. But can he? Will Sasha love him and give up her mortal life?

Final Thoughts:
After spending my weekend stumbling through a not-so-great book, I was rewarded with the delight that was The Mephisto Covenant. It’s fast paced, always moving through more and more tribulations. Plus, a romance that actually takes it’s time to build, with lots of will-they-won’t-they. Switching back and forth between the two main characters, Sasha and Jax, we get to see the inner struggles of each. Both POVs are fun, witty, strong and believable. And for once, I enjoyed the high school aspect of the book.

Here we have six brothers born of hell, fighting to keep Lucifer in power and protect the free will inherent in humans. It’s a change from the usual demonic farce, and one that I really enjoyed. I found a strong resemblance between these brothers and those of the Black Dagger Brotherhood. They’ve got the long dark hair, leather trenchcoats, and a range of personalities. They troll for anonymous sex, but they’re waiting for love. But basically they’re six badass guys taking down evil. This book is subtitled: The Redemption of Ajax, so I’m guessing we’re going to be following a different brother with each book.

There were so many characters introduced throughout this book, on top of the already large clan of brothers. High school actually played setting for a fairly big chunk of the book, and so, many of the students were named and personalised. Minor plot points were brought in that really probably didn’t need to be there, but I appreciated the detail nonetheless. It really helped in respect to the realism that I experienced while reading. It’s a wonder though how Faegen kept on top of it all. I know I certainly forgot who was who with a lot of them.

There are a lot cultish antics going on, centring on recruiting high school students into their terror-filled plot. Cults, and the ways in which they lure people really fascinated me. The plot just keeps moving without really letting up, lots happening all the time. The climax did let me down a bit though. I felt that it just decided, here’s the end, let’s be done with it. I still enjoyed the end result, but would have liked a little something more to have happened. There were lots of twists though, plenty that frustrated me, but they served their purpose in propelling it where it needed to go.

Frustration can be good though. There were some very evil characters. Not take over the world evil, regular, downright nasty people. I have to mention the inclusion of another evil, douche-y Brett. I’ve yet to find a character with my name who’s actually one of the good guys. I enjoyed the harsh dynamic, watching as Sasha struggled through rumours, lies as well as some physically hurtful people. Sasha is strong willed though, holding herself together through all of the disaster surrounding her.

Jax, full name Ajax (named after a cleaning product?), is the romantic lead always there to help Sasha. He’s trying to win her heart amidst all of the drama and evil taking over the school. Their relationship has plenty of struggles to it. Seeing inside both heads shows the inner war they each wage. The romance plays a heavy part in the plot, and thankfully it was one that I really enjoyed being taken along with.

The world building is very rich in terms of the history of the brothers, their followers and all of the rules that go along with them, the war being waged, their purpose in it and their true purpose. While it may have let me down in terms of the climax, the overall adventure was one that I thoroughly enjoyed. I hope to read more of this series soon. Thanks to EgmontUSA for supplying me with this digital review copy, I’ll definitely be buying a hard copy when I find one in store.

And just in case you’re interested:
This YA book does feature some course language and violent sexual references/scenes that may not be appreciated by some readers. While this didn’t disturb me, I thought I’d point it out.

Recommended to:
Those looking for a demon romance, with lots of evil coming from some of the most unlikely places.