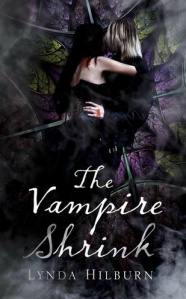 Kismet Knight, PhD, doesn’t believe in the paranormal. She especially doesn’t believe in vampires, but she begins to wise up when she is introduced to a handsome man named Devereux who claims to be 800 years old. Kismet doesn’t buy his vampire story, but she also can’t explain why she has such odd reactions and feelings when he is near. Then a client almost completely drained of blood staggers into her waiting room and two angry men force their way into her office, causing her to consider the possibility that she has run afoul of a vampire underworld. Enter FBI profiler Alan Stevens, who warns her that vampires are very real, and one is a murderer—a murderer who is after her.

The Vampire Shrink lives up to its name, but it’s also so much more. There are plenty of therapy sessions as Kismet tries to help a teenage girl through her delusions, as this girl believes vampires are real. There are numerous pop culture references to sparkly vampires and Robert Pattinson, Lady Gaga even gets a mention in there somewhere. Kismet also has a love for all things Harry Potter. I enjoyed these things, but I think they may have been a little overused. I prefer the indirect references over the flat out name dropping.

This is an adult aimed book, although I didn’t have any problems connecting with the female lead. Her personality traits were easily relatable, for me at least. Kismet was introverted personally while still able to hold her own on the professional front. There is a lot of inner dialogue, as she comments on her clients and those around her, while keeping her ever nodding Psychologist’s poker face. While I enjoyed the therapy side of the book, where I found myself most intrigued was the vampire aspect.

It’s handled differently. Maybe because it’s not a YA book, maybe just because the author was feeling particularly creative. Here the leading woman is very cynical when it comes to believing in the supernatural, often seeing those around her partaking in the vampire charade as deranged, classifying them as mentally unhinged. Her stubborn streak, even with enough evidence to the contrary, is quite understandable. I can’t say it didn’t annoy me about her though, groaning at the pages for her to believe the ‘god of a man’ could actually be the centuries-old age he claimed to be, but on the other hand, it also made her a stronger character for not giving in to her long held foundations of reality.

There wasn’t just sex though, that came secondary to the romance. I found it hard choosing sides in the love triangle, even though the author was leaning heavily to one side of it. Both men had their own qualities that gave them a unique charm, Devereux especially with his psychic mind meld. I liked that the vampires weren’t opposed to drinking blood, often entrancing humans or finding willing donors. The magical aspect verged on fantasy, with alternate realms, mystical mountain sex and Pagan rituals. I think there may have even been a magic wand involved in there somewhere, or maybe I’m just channelling Kismet’s love of Harry Potter.

Adding in the cop aspect helped ground some reality into the fantastical. Although, once you get into the bulk of the story, you really need to check your concept of reality at the door and lose yourself in it. Dr Kismet Knight, PhD, has one of the wildest lives I’ve seen in adult fiction and I can’t wait for more of it. With lots of sex, cute special agents and a snarky, often stubborn leading lady you’re sure to find of a lot fun in this new series.

Recommended to:
Those looking for a vampire romance that verges between the hard constructs of reality and the world of fantasy.