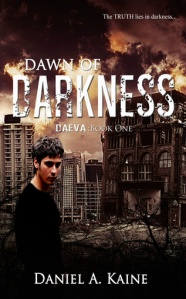 Unburdened by the pain of loss and heartbreak, Mikhail is content with his life of solitude. But everything began to change the day he realised he has a psychic ability — the power to alter the emotions of those around him.

Ushered into the Military Academy with others like him — other Daevas — Mikhail does his part to help tip the scales of war against the vampires that destroyed the world and plague what remains of humanity. But after going up against his first vampire, Mikhail starts to question everything he thought to be true.

To discover the truth and expose the lies he once believed, Mikhail will set out on a journey of discovery, and learn some things about himself in the process.

To be honest, the first thing that sprung to mind when I started reading this was its similarities with Power Rangers RPM. Okay, maybe not as squeaky clean, but they both involve a shielded city erected to protect the remaining population after the apocalypse, and have a girl and four guys teaming up as the last line of defence. Although with Dawn of Darkness there’s no spandex or rubber-suited monsters, but rather deadly vampires that would make quick work tearing the rangers flesh off before they even reached for their morphers.

While I do enjoy the romantic vampires, evil ones feel more true to nature. The idea that vampires could overrun the Earth and wipe out the majority of humanity seems more plausible than vampires kissing people to death. Although… The world building, setting aside its RPM-ness, was very unique. The Daeva concept of humans being born with different abilities and recruited into the army held lots of potential. I was afraid, though, that the military setting would become monotonous after a while, but it managed to keep things fresh with things I didn’t see coming. The mystery held together well and kept me guessing throughout the book.

The characters, well I loved them. Everyone’s troubled in their own way and just a little broken. Even the side characters had backstories to help flesh them out. The main two, Mik and Ash, stole it for me. I enjoyed the slow reveal into each of them as they broke through each other’s defences. I like the contrast between Ash’s outgoing, flirtatious nature and Mik’s reserved one. They fit together well making their scenes incredibly touching. The fact that the characters had such a strong friendship to build on helped in the believability department too.

The romance, while definitely stimulating, was more than that. Don’t get me wrong, I enjoyed those scenes too, but the strength of their bond was what really attracted me to them. I couldn’t help but grin at this line, however unintentional: Ash looked over at me as I exited. He was sprawled out across his bed, wearing only a pair of black joggers. In Australia, joggers are another word for sneakers so I got a completely different visual. I realised a couple chapters later that joggers probably = track pants. But I think I’ll stick with my interpretation.

I wasn’t expecting there to be so much travelling in this book. I have to say I preferred the city scenes over the campfire barbeques and sleeping bags, but each to their own. There was a lot of good character development along the way which helped carry the momentum. But I think it was about midway through the book though when I wanted to strangle Daniel (the author, not the character). He knows how to screw with your emotions. To make matters worse, 2am had rolled around and my body needed sleep, but I didn’t want to stop reading.

I came back to it the following night and rushed through the final half. I enjoyed the growing friendships, but my brain kept niggling at me, “Where’s Ash? I want Ash. He’s blond, no that’s not Ash.” I liked the incorporation of magic into the physical fighting, it’s also spaced enough that it doesn’t feel heavy. The violence tends to be on descriptive side, but nothing overtly gory. Although, I can say I have no intention of hunting in the woods. The deer of 2105 can rest assured they’re safe from me, added with the fact that I’d be encroaching on 116. The exploration into Mik’s psychic abilities was interesting, and something I’d like to see more of with the other Daeva. It also injected some fun into the sometimes-dark nature of the events going on around them. A werewolf unable to stop himself nuzzling Mik’s leg – love it.

Even with everything that happened, it still felt like there was plenty more to left to delve into with lots of characters untapped, new settings to explore and the growing tensions waiting to erupt. The Russell plot felt a little rushed to me, though. But overall, the twists were executed wonderfully, leaving me staring blank-faced at the book. I felt like screaming at the end, desperately hoping for more. I know the wait for Origin of Darkness is going to be painful.

Recommended to:
Those looking for a well-characterised gay romance, one with the full package. Action, mystery, magic, vampires, shifters, dystopia, it’s all here.