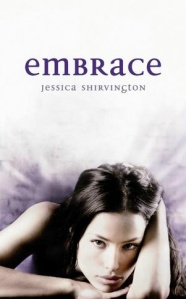 All Violet wants is to be with Lincoln. But he has a secret so great it could tear them apart.

Then there’s Phoenix. He’s intense and enigmatic, but always there for her.

Caught up in a battle between dark and light – where angels seek vengeance and humans are warriors – Violet must decide how much she’s willing to sacrifice. And who to trust…

The wrong choice could cost not only her life, but her destiny.

Final Thoughts:
It’s obvious from the blurb that there’s a love triangle on the way. I usually love these, but this one not so much. It was heavily weighted to one side, and for me it wasn’t the side I wanted. There’s lots of build up to one relationship and then bam, you’re shoved into the other one. I realised there was a need to develop the second pairing, but the way it was done came across somewhat jarring considering the strength of her feelings towards the first guy. Now with that said, I actually did love this book. The plotting is very well thought out, with lots of depth to the angel lore that is sometimes lacking in others of the genre. Everything comes together well, with lots of tension and revelations. It renewed things enough that I can forgive the romantic detour.

Violet’s a very active character physically, which helps her a lot. She’s also has problems in her past, along with a mother who died in childbirth and a father who immerses himself in his career. That leaves her with a lot of parent-free time. It’s a regular occurrence in YA now, but the relationship she has with her single-parent father feels natural for the circumstances. Burying her inner demons, most of her time gets spent either hanging out with her fashion-loving and secretly academic best friend, Steph, or lusting after her older guy-friend and training partner, Lincoln. There’s a lot of anger pulsing out of Violet after finding out the truth behind all of the lies people have fed her. She has the strength of will not to just sweep things under the rug, but it also means she’s quite unwavering on her grudges.

When it came to the romance, I was Team Lincoln from the start. I don’t know if introducing him first biased me, but I felt like he and Violet had more potential to work as a couple. There were plenty of huge obstacles in their way, but they definitely had a connection, one that had believability as it had been building for at least two years. Lincoln had the whole nice guy, don’t-want-to-push thing going for him. I enjoyed that he could show his affection through little things that proved how well he knew her. In my opinion, he might have been a little too nice and respectful of her feelings when he should have been fighting for her.

Phoenix gets a heavy push to the front of the limelight, taking over a lot of the page time. He’s the kind of arrogant guy you want to ignore but can’t stop yourself. And with his dark purple and silver hair, neither can Violet. I liked that Phoenix shook things up at first, but I quickly wished he’d stop making the moves on her. All of their scenes together are written well, with lots of romance going on, but I couldn’t help but want Violet pack up her things and run back to the guy she’s actually known for more than a day. This relationship definitely progressed quickly. It worked well in the grand scheme of things, and I did start to like Phoenix, but it still frustrated me.

This isn’t just a book about love triangles, though. It dives right into the heart of the angel plot, adding new dimensions to the genre. The lore is very intricate, creating problems and forcing characters into making tough choices. It’s not an ‘I’m-an-angel-how-can-we-possibly-be-together’ type of thing. Here we have both Nephilim and fallen angels known as Grigori and Exiles respectively, fighting each other and taking down anyone in their way in a war for Earth. It surprised me in this respect, the characters have purpose. It’s not really heavy on the action, but there are the occasional bloody slayings going down. I like the infusion of magic, or rather special abilities that each of the Grigori have. Each one is different which adds new possibilities as to where things can lead.

The last hundred pages really hooked me. It’s not one of those ignore-the-paranormal-until-the-final-quarter books, but it did up things a notch. There were lots of revelations, pain and signs of growth. It also started setting up for greater mysteries to come.

Recommended to:
Those who have stumbled through the angel genre and are looking for something with a bit more to it.