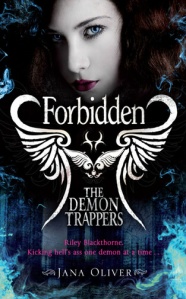 Riley’s beginning to think being a demon trapper isn’t all it’s cracked up to be. Her dad’s been stolen by a necromancer, her boyfriend’s gone all weird and she’s getting warm and fuzzy feelings for someone who’s seriously bad news. It’s tempting to give it all up and try to be normal, but that’s not an option. Because the demons have plans for Riley. And they’re not the only ones.

Final Thoughts:
While the first book introduced lots of world building, this one felt scaled back in that regard. The dystopian-esque setting takes the backseat to Riley’s love life and the trust issues surrounding her after the events of Forsaken. I liked the romantic focus, but when there’s a love square (yes – she has three potential love interests) you end up spreading things a little thinly with some of them. The final quarter of the book does pack some serious punch though, so if you can stick around until then it’ll probably hook you enough to come back for book three.

While the setting doesn’t receive as much attention, there’s still enough that you’ll feel like you’re part of this world. It’s within the realms of possibility if you overlook the witches and necromancers operating out of the parking lot markets. Also the demonic public disclosure poses a bit of a hurdle. Okay, maybe it’s not exactly reality, but ignoring the paranormal, a lot of the dystopian aspects feel like they could be a possibility. Skyrocketing fuel prices and a lack of metal have led people back to horse drawn carriages as well as implementing human traffic controllers. I like these ideas, but what seemed like a bit of a plot hole was Riley’s ability to keeping fuelling her car when she could barely afford groceries. Wouldn’t it be smarter to ride a bicycle or something?

There are hardly any school scenes this time around, which improved things flow wise as I felt they just slowed things down before, not really adding anything to the overall plot. Not getting scaled though, was Riley’s best friend, Peter, who actually got more page time in Forbidden. I liked his subplot, adding more depth to his character. It’s nice for a girl to have a straight guy friend in a book without the guy having to be secretly in love with her. Maybe Jana thought having a love pentagon was a bit too much.

In regards to the love square, I have to say, what the hell? There are just too many love interests, and really there’s only one she should be with, even if she’s oblivious to it. With Simon, her fellow apprentice who’s got a major hang-up on God, it’s like someone’s flipped his douche switch, going from a total sweetie to a complete asshat (Jana’s words). I see why it was done, but I didn’t like it. Ori, on the other hand, is a sex god. You know the type, tall, dark and brooding. Can’t help but exude the sexy. Yeah, he pretty much has that effect on Riley, dousing her in kisses and white roses. Plenty of romance going on this time around.

But what I really enjoyed was Beck’s sideplot. The book splits off in two POV’s following around Riley’s father’s top man. He’s got issues coming out his ears. Downing his troubles in alcohol, being way too overprotective to the point of annoying, and other things I don’t want to spoil you with. I’ll just say that I really liked where things went with him, it loosened some of the kinks in his armour and showed a softer side to the early twenties, Taylor Swift-loving, Middle East war vet. Yes, like I said, issues.

The Holy Water scam from the first book is still on-going. It doesn’t seem that important with everything else going on, but I’m sure it’ll end up playing some bigger part to things and I’ll have that ‘ohhh’ moment. Since the series is called The Demon Trappers, maybe I should mention there are actually demonic things happening, not just the romance. It probably didn’t get as much focus as I would have liked, especially the introduction of the demons hunters, but the series is setting a lot of things up. Things that I’d expected after the first book didn’t happen, but then things I didn’t expect did. The ending came out of nowhere. But one of the twists was a little obvious as I’d come across the exact same subplot in the last book I read by a completely different author. If I hadn’t just read that other book, I might not have picked up on it.

Recommended to:
Those after lots of romance, mixed signals and pent up feelings. Oh and some demons.