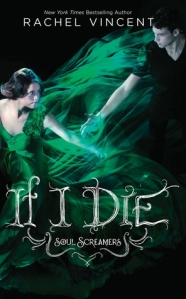 The entire school’s talking about the gorgeous new math teacher, Mr. Beck. Everyone except Kaylee Cavanaugh. After all, Kaylee’s no ordinary high-school junior. She’s a banshee—she screams when someone dies.

Yeah—it’s a shock to her, too. So to distract herself, Kaylee’s going to save every girl in school. Because that hot new teacher is really an incubus who feeds on the desire of unsuspecting students. The only girls immune to his lure are Kaylee and Sabine, her boyfriend’s needy ex-girlfriend. Now the unlikely allies have to get rid of Mr. Beck…before he discovers they aren’t quite human, either.

But Kaylee’s borrowed lifeline is nearing its end. And those who care about her will do anything to save her life.

Final Thoughts:
This is the book the series has needed. Soooo much romance. While I’ve really enjoyed the Soul Screamers so far, If I Die took it to a whole new level. It was possibly everything you could want and not want thrown together in a storm of emotions. It pained me to put it down once I realised 3am had caught up with me. I kept searching for a chapter to end things on comfortably for the night, but unfortunately Rachel has written a book that just won’t let go of you. But once I found page 204, I forced myself to seal the book and grinned myself to sleep.

Again with the unfortunates, this book happens to be the most spoilerific creation in history, that discussing what I liked about it in any detail is almost an impossibility. The blurb gives away the gist without actually giving away “the gist”, if you get what I mean. Basically, Kaylee is scheduled to die and her being the person that she is, she lets her determination to help protect others overtake the freak-out that would have been the normal person’s reaction to their impending death.

There are so many things happening this time around, and I liked that. There’s the normal hell taking over Kaylee’s high school, seriously you’d think they’d just condemn the place, but there’s also lots of side drama going on. And unlike My Soul To Steal, which tended to frustrate me with its blatant boyfriend-stealing angst, I actually kind of loved it all. Sabine has really became quite endearing in her own way. I don’t know why, but I’m loving frenemies at the moment. The semi-truce of these two girls, with all of the in-fighting and constant jabs at Kaylee’s expense, made it that much more fun.

The characters aren’t perfect but they have more realism to them, paranormal aspects aside. And while I do love the world these guys live in, it’s the bonds, the personal struggles and Tod’s superfast pizza delivery skills that bring me back. Okay, maybe not those skills… I’ve noticed a lot of growth this time around with almost everyone finding themselves tested in one way or another. Kaylee surprised me especially. Knowing when you’re going to die has to be one of the worst things imaginable. Following her as she dealt with this was fun as it changed the dynamic we’d been used to. Her do-what-I-want attitude really shook things up in a good way.

Relationship-wise, I have to say Rachel has nailed it. Things have never really been stable, which is a good thing. It keeps you guessing, thereby preventing the mould from setting in. And I have to say, If I Die is definitely not mouldy. The romance she has crafted here tore me to pieces with its brilliance. LOVE IT. If I had any doubt on whether you could hug a book, it’s now gone. With some of the twists, I kind of suspected she might inflict them on us. After my experience with Rachel’s Shifters series I’ve come the conclusion that if you don’t want her to do something, she does it.