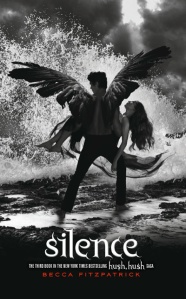 The noise between Patch and Nora is gone. They’ve overcome the secrets riddled in Patch’s dark past…bridged two irreconcilable worlds…faced heart-wrenching tests of betrayal, loyalty and trust…and all for a love that will transcend the boundary between heaven and earth. Armed with nothing but their absolute faith in one another, Patch and Nora enter a desperate fight to stop a villain who holds the power to shatter everything they’ve worked for—and their love—forever.

Final Thoughts:
If you read the blurb and then go into this, you’ll probably be very confused. ‘The noise between Patch and Nora is gone.’ If by noise, they meant complete knowledge of Patch, then yes, the noise is gone. Nora has amnesia leading back to before the events of Hush, Hush, leaving her with no knowledge of fallen angels or her hot, but often bumpy, romance. While making Nora a clean slate was an interesting route to take the story down, I felt like it took up too much of the book. But with that said, I did love the rekindling experienced. Who gets to find their once-in-a-lifetime love twice?

Realising that Nora had no memory, I felt both intrigued and a little frustrated, which was probably what Becca had been intending. Reading the book knowing what’s going on, but having the main character oblivious provided for a lot of ‘hurry up and remember’ moments on my part. Looking back, it works well though. The plot being aimed for would most likely have fallen apart without the memory lapse. I didn’t hate the device, though. It actually had its enjoyable moments. The manipulation that goes on discerning Nora’s knowledge of Patch is both annoying and entertaining at the same time.

If you’ve read the first two books, you might have picked up on the fact that Nora has a knack for getting herself into dangerous and sometimes idiotic situations. It used to annoy me, but now I just laugh seeing what she can stumble her way into next. I love this line especially. I jotted it down because thought it summed up Nora’s antics perfectly: ‘Vee never needed a reason to do something stupid. Sad thing was, most of the time I didn’t either.’ There weren’t as many of these situations this time around, although I still managed to get a few eye rolls in at some of her decision making.

Marcie, who’s always had a distinct hatred towards Nora, went through a bit of a change this time around. With Marcie’s dad and Nora’s mum dating, there’s a link between the two girls, despite however much they’d prefer it be severed. Urged by her father to be nicer, we get to see Marcie’s attempts at ‘nice’. I loved these scenes. The bitchiness is still there, but it’s laced with a smile. If anything, I found these two together much more fun than anything we got between Nora and Vee. Frenemies all the way!

Scott or ‘Scottie the hottie’ (as Vee likes to call him), who showed up in Crescendo, is back and in full-on flirt mode with Nora. I enjoyed these two hanging out together while Patch was out of the picture, but I couldn’t see a romance between the two of them working. They fit better as friends. Although, I do like the dynamic created, it seems to fill in the gap where Vee’s presence lacks. For the better part, Vee felt toned down to me, less diets, less doughnuts, less boys – basically Vee-Lite.

The romance was handled with less frugality than in Crescendo, much to my relief, I don’t think I could have handled that much angst twice in a row. Here Nora stumbles upon a dark-eyed, baseball tee-wearing guy named Jev, which is Patch’s real name if you remember from earlier books. I wasn’t sure whether the name change was to stop Nora from putting the pieces together or simply because he didn’t want to go by his nickname anymore, but regardless, I liked what followed. The romance is very addictive, reminding me why I loved Hush, Hush so much in the first place.

Somehow, Becca has managed to weave even more depth into this plot, adding a lot of character growth all round. The Black Hand kept me guessing with his intentions, providing a perfectly smarmy villain. I love it when the evil has everyone fooled into thinking they’re Mr Perfect. A couple things I picked up on as potential twists did happen, but for the majority, it managed to surprise me. I can’t really fault Becca in terms of her writing style. It’s very descriptive without getting caught up in the background. And again, the romance – love it! I can’t wait for book number four.

Recommended to:
Fans of Hush,Hush who may have been discouraged by the frustrating level of tension in Crescendo, you definitely need to read this.