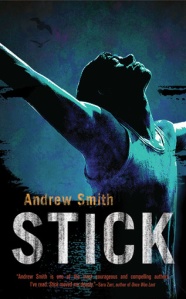 Fourteen-year-old Stark McClellan (nicknamed Stick because he’s tall and thin) is bullied for being “deformed” – he was born with only one ear. His older brother Bosten is always there to defend Stick. But the boys can’t defend one another from their abusive parents.

When Stick realizes Bosten is gay, he knows that to survive his father’s anger, Bosten must leave home. Stick has to find his brother, or he will never feel whole again. In his search, he will encounter good people, bad people, and people who are simply indifferent to kids from the wrong side of the tracks. But he never loses hope of finding love – and his brother.

Final Thoughts:
Stick shattered my expectations. I’m left in awe over it. It was a book I simply had to read in one session, there was no way to put it down. While the main character was thirteen and a boy, something different from my usual literary outings, I found Stark McClellan’s story incredibly heart wrenching. In a book reaching less than 300 pages, I still managed to care about these characters in a way a book hasn’t been able to make me feel in a while. There were actual tears in my eyes. If a book can make me cry – 5 stars.

The story focuses heavily on brotherhood. Stark (referred to as ‘Stick’ because of his appearance) and his sixteen year old brother, Bosten, have a very close relationship for siblings. I really enjoyed these two. Even with everything they had to deal with they were still able to joke with each other, stand up for the other and most of all talk openly about things that mattered. It was a refreshing dynamic. The characters aren’t flat, they have plenty of struggles (ones I couldn’t believe were happening), flaws and they make mistakes which all helped round them into characters that felt real.

Stark and Bosten’s close bond seemed to really strengthen from the abuse they have to endure at the hands of their parents. It’s very disturbing thinking about what kind of life these boys have had, and even worse, how they see it as normal as it’s all they’ve ever known. These parents deserve a long stay in prison. Aside from the home trouble, a lot of attention is drawn to the fact that Stark was born with only one ear. It’s used as a constant reminder that he is different. Stark’s own idiosyncrasies are very much a sign of this internal torture he’s been battling with his whole life. It upset me that he would always put himself down whenever someone other than his brother showed him kindness.

There are a lot of drug references throughout the book too, even if Stark wasn’t partaking in them. But being that the main character is thirteen, verging on fourteen, sex is very prevalent on Stark’s mind. Not so much the act, but more the attraction. It seemed he was constantly battling unwanted erections. Just about any female would set him off. It worked well for getting into the mindset of the age. But there was a sort of innocence to Stark. There is definitely a romantic front on his horizon, but he’s not the type to get close to others. His self-conscious state added to the emotion it brought out. There are some really beautiful scenes. I especially loved the hair washing.

The theme of learning to stand up for yourself was prevalent, or maybe moreso, learning to believe in yourself. Bosten plays a part in this, as well as some other caring people Stark comes across in his journey. It really shows his character as Stark learns that his brother is gay, something he’d never considered before, but readily accepts it without a second thought. But even with the good, there was certainly enough of the terrible to hone in the harsh reality. The characters really are put through the ringer as they have a lot more than just their family to contend with. It was probably why I loved it so much, the bad was needed to highlight the good. The growth in Stark impressed me, but I was left with both happy and sad tears as it brought me to a point of utter despair. It’s such a powerful read that I don’t know if I want to, or even can, stop thinking about it.

Recommended to:
Those looking for some very emotional brotherly bonds that deal with abuse and other forms of adversity.