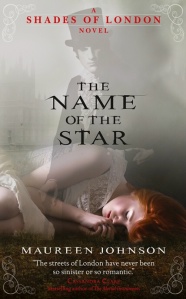 Title: The Name of the Star (Shades of London #1)
Author: Maureen Johnson
Published: October, 2011 by HarperCollins
Thanks: HarperCollins, AU via NetGalley
Pages: 372
Rating:

The day Louisiana teenager Rory Deveaux arrives in London marks a memorable occasion. For Rory, it’s the start of a new life at a London boarding school. But for many, this will be remembered as the day a series of brutal murders broke out across the city, gruesome crimes mimicking the horrific Jack the Ripper events of more than a century ago.

Soon “Rippermania” takes hold of modern-day London, and the police are left with few leads and no witnesses. Except one. Rory spotted the man police believe to be the prime suspect. But she is the only one who saw him. Even her roommate, who was walking with her at the time, didn’t notice the mysterious man. So why can only Rory see him? And more urgently, why has Rory become his next target? In this edge-of-your-seat thriller, full of suspense, humor, and romance, Rory will learn the truth about the secret ghost police of London and discover her own shocking abilities.

Final Thoughts:
I wasn’t sure what to expect with this one. I’ve never really followed the Jack the Ripper history, at least I hadn’t until a university assignment had me watching one of the movies. While this book does draw a lot of focus towards the murders, it bridles it with plenty of boarding school drama to keep things from getting too morbid. When you add in a dash of the paranormal and a heap of likeable characters, it makes for an enjoyable read.

While Rory’s POV takes on the majority of the page time, there are random perspectives lightly interspersed throughout the book that help gain further insight into the mayhem taking over London. But as the main character, I found Rory to be a welcome change to some of the more inept heroines floating through the YA market at the moment. She’s quiet but also outspoken when she needs to be. I loved her humour and her ability to annoy the stuck up ‘head girl’. Rory, being American, translates and explains a lot of the idioms that are intrinsic to the cultural barrier between the US and the UK. But I did enjoy when she got them wrong herself.

As I’ve mentioned, it’s very heavy on the boarding school aspect, at least for the first half of the book. The classes weren’t really explored, which I was thankful for, but we did get to see a lot of dorm room bonding and cafeteria conversation. Oh and the hockey. While I have no desire to play it, I enjoyed reading it for the simple fact that Rory hated it. Everything experienced at the school really helped to building these characters up into quite distinct versions of themselves.

The romance didn’t really work for me though. Rory and the boy I won’t name didn’t appear to have much chemistry, yet they made out nearly every time they saw each other. To me, I felt like they were friends who were together more out of convenience than of romantic interest. There were actually a couple of other boys that I would have preferred her to have gotten with, ones that had a connection even if they didn’t realise it. Unacknowledged tension, I like it.

The setting of London was taken advantage, taking on a character of its own. The underground stations, the police cars, the double-decker buses, the underage drinking, the abnormally large beer, the constant CCTV cameras everywhere. There was so much work put into describing it. I also loved that Rory was always cold yet everyone around seemed comfortable walking about in hardly anything clothing. When it came to the media coverage, the hysteria, it all built together so well that you couldn’t help but feel trapped in the middle of the madness with them.

Once the paranormal finally came into it, it felt like a switch had been flipped. Suddenly the school life faded into the background and things really got moving. This is probably what took this from a three to a four star for me. Even though it was obviously delving into aspects of the supernatural, it still had an air of science that grounded it somewhat, leaving it in the realms of possibility. The Jack the Ripper plot and the paranormal plot equals lots of fun. There’s lots of violence but it’s nothing too brutal for those with weak stomachs. It’s one I’m glad I stumbled across. The Name of the Star is smorgasbord of awesome twists, broken characters and the officiousness inherent in human nature.

Recommended to:
Those interested in boarding school drama, historical retellings and even paranormal fans in general.