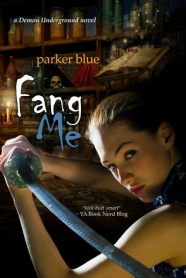 The vampires want it. The demons want it, too. And someone is willing to kill Val for it.Val and Fang have to find the powerful Encyclopedia Magicka before either of San Antonio’s warring underworld factions locate it or the consequences will be deadly for the entire city. As usual, Val’s vampire enemies (they still call her The Slayer) want her dead. Even some of her fellow demons may be less than trustworthy, since they’d like to grab the legendary book of spells before she does. Val has a personal claim to the Encyclopedia–her demon father left it to her when he died–but someone stole it recently. And that can’t be good.

Battling vamps and dodging demons, Val struggles to unravel the mystery and find the thief. At the same time, she’s fighting her attraction to sweet, sexy Shade–her favorite shadow demon. Rumor has it that Val will lose her part-demon, vampire-fighting powers if she gives herself to him.With a crowd of vamps and demons out to trick her or kill her, it’s not a good time for her to risk her job as the city’s best vampire hunter by falling in love. The stakes are high and aimed right at her heart. But Lola, Val’s hungry little lust demon, doesn’t like being denied. Will Lola finally get her way?What’s a part-lust-demon-teen supposed to do? Whatever it takes.

Final Thoughts:
With a plot very much like that of book two, I didn’t find it as enthralling. There are new characters though, that help bring the tension. Shade and Val’s relationship has its strains and so does Val’s life in general. Reading the first three books in the series in a row has allowed me to witness the progression of the characters over a short period. I like that they’re learning about themselves and growing, but this whole ‘search for magick books’ plot feels like it’s been going on for way too long. Let’s get back to the vampires.

The introduction of Trevor, the keeper, and rightful owner of the missing books, threw a bit of a wrench into Val’s world. He’s walking perfection and he knows it – which rubs her the wrong way. He’s got the whole smarmy, two faced thing going for him which only Val and Fang seem to be able to pick up on, hence all of the tension. There were moments when I felt like slapping sense into some of the characters.

Shade was one of them. I could see both sides, but his easy going-ness got a little frustrating when it resulted in his blind adoration of Trevor. Val showed her growth though in her development of tact, but she still had a few brain-to-mouth slips. I did like the way Val and Shade managed their relationship through each other’s stubbornness though. The romance seemed to continue on from the last book, diverging further and further away from the Dan angle of the first book.

I have liked the realism it has showed through the experience with Dan—fictional relationships don’t always have to have a happy ending. People break up, they move on. I’ve been kind of missing Dan’s company on the cop partner angle. He was a fun perspective to be around. He’s still here, but it’s more in a cameo capacity. It’s good to see him and Val somewhat civil, and semi comfortable around each other. They worked well together before all of the romance and hurt feelings came into it.

There’s still very little vamp interaction in this book, something that I found enjoyable in the first book. Alejandro and his minions have become one of my favourite aspects of the series yet they only make brief appearances. I’d like it if the books were a bit longer as more ground could be covered on that front. Also it feels like the scenes seem to progress very quickly. With a longer book, they could be fleshed out so we could get more than just brief encounters.

As for Fang, I mentioned in my last review that he’d started losing some of his snark with the addition of his pooch girlfriend, Princess. After seeing more of him this time around, I’d have to say that he’s grown. He’s become more of a friend, looking out for Val’s best interests, even when she doesn’t know it. I’m interested in figuring out what’s up with Princess, if there’s more to her persona or if that’s just her. I guess I’ll have to wait it out for Make Me.

Recommended to:
Those after more of Val’s sleuthing and demon romance.