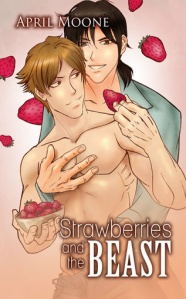 Reckless, flamboyant Keigo is bisexual. Blunt, aloof Masaki is straight. Their conflicting personalities make them unlikely friends, but after some careful maneuvering on Keigo’s part and one strawberry-flavored kiss, Masaki gives more of himself to Keigo than he ever thought possible. More than he’s willing to share with his girlfriend. But Masaki’s fear of commitment threatens to shake their rocky relationship to pieces.

Keigo’s new feelings for Masaki are confusing enough even before his on-again, off-again lover, Kaname, blows back into town. Kaname is a manipulative beast, demanding Keigo’s undying fidelity in return for his cruelty, and Keigo’s fragile relationship with Masaki cracks under the weight of his presence. If Keigo really wants to build a life with Masaki, he’ll have to discover the strength to free himself of Kaname and convince Masaki to be with him forever.

Final Thoughts:
Sex. There is lots of it. If that’s what you’re after, you’ll be pleasantly rewarded. Almost every chapter is packed with hot m/m action. There is a plot too, although it takes its time showing up. With dual POV’s, chapters switch seamlessly, delving into the fears of each of these guys. Both are likeable, but they’re more than a little broken. It’s also very Japanese, incorporating the feel of the culture into the English text while still maintaining enough of a balance. Plus there’s a glossary of terms if you need to refresh yourself.

I studied Japanese all through high school, but back then I never really had a love for it. Now I can’t get enough. There is a lot of importance put on the honorifics, with Masaki’s inability to use Keigo’s first name for fear of getting close to someone made a big deal of. I liked the teasing nature that ensues between them and the slow progress that each of them make in opening up to one another. There are serious moments but there are also plenty of other moments where it would be easy to imagine exaggerated anime versions of these characters. Plus with side characters named Yuki and Kaname, it left me wondering if April was a Vampire Knight fan.

The two main guys are quite different initially, but that seems to work for them. The characters do develop over the course of the book though as they come to realisations. The ‘straight’ character is a little distant, pushing people away until bisexual Keigo comes along and won’t leave him alone. Even though these characters are supposedly straight and bi, they didn’t really show any interest in women. Masaki, who had a girlfriend, kind of forgot about her jumping straight into sex with Keigo and then found himself thinking only of Keigo whenever he was around Yuki.

Keigo’s a complete flirt, seemingly happy all the time. Although, he uses it as a mask to hide the confusion he suffers underneath from years of physical and mental abuse. I really didn’t like the pain he went through, it was like he separated himself into two different people. One minute secure and happy with Masaki, the next beaten and crying in a toilet stall. His relationship with Kaname has no love, only violence, but it’s one he’s unable to break. It’s interspersed well throughout the book, there to put obstacles in Keigo and Masaki’s path.

Masaki has the ‘Gay For You’ thing going on. He questions himself (and Keigo) a lot, but pushes the thoughts away with his nonchalance. It’s a little suprising how easily he slips into bed with Keigo, needing little persuasion after the months of holding onto pent up frustration over his virgin girlfriend. By about chapter five Masaki topping is pretty much a given, and it really doesn’t let up from there. There’s nothing really cringe worthy in the descriptions, and I especially enjoy Masaki’s language switching mid moaning. I lost count how many times there were between them, especially with their all-nighter. They always seemed to be all over each other, even taking to a private room in a restaurant.

And if you’re reading for the plot, it really does pull on your emotions in the final quarter. Things get serious, but there still lots of smile moments. The abuse, the lies, the miscommunications, the nervous proclamations, it’s very addictive. Watching as they figure out how to love and be loved was probably my second favourite aspect of the book.