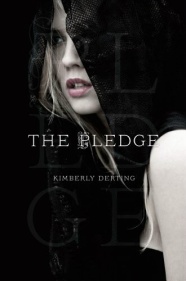 In the violent country of Ludania, the classes are strictly divided by the language they speak. The smallest transgression, like looking a member of a higher class in the eye while they are speaking their native tongue, results in immediate execution. Seventeen-year-old Charlaina has always been able to understand the languages of all classes, and she’s spent her life trying to hide her secret. The only place she can really be free is the drug-fueled underground clubs where people go to shake off the oppressive rules of the world they live in. It’s there that she meets a beautiful and mysterious boy named Max who speaks a language she’s never heard before… and her secret is almost exposed.

Charlie is intensely attracted to Max, even though she can’t be sure where his real loyalties lie. As the emergency drills give way to real crisis and the violence escalates, it becomes clear that Charlie is the key to something much bigger: her country’s only chance for freedom from the terrible power of a deadly regime.

Final Thoughts:
I don’t know what I was expecting, but this wasn’t it. I loved the cover when I first saw it and couldn’t wait to read it. While I still enjoyed the book, I wasn’t overly enthralled by it. The world building was unique and interesting, but the main characters didn’t hold my interest. Charlie is constantly putting others first, looking after her little sister and managing to feign adherence to the language-barrier class system. These are all good traits and I liked her for it, but the romance just didn’t work for me. I just felt like I was sitting through it, rather being caught up in it.

My aversion on the romance front has something to do with Max and his ability to dodge just about question. He’s the mysterious love interest guy, I get that, but it’s frustrating to read over and over. I was glad that Charlie wasn’t one to give up easily, pestering him for answers. Charlie wasn’t stupid, far from it. She actually had a backbone and managed to think things through. But when she started obsessing over him–a boy that’s been nothing but cagey–that’s when I started losing interest in them as a pairing. Don’t get me wrong, Max has his good points and there were moments between them that I thought played out well, but overall, it wasn’t my thing.

The scenes with Charlie’s school friends Aron and Brooklynn were probably the most enjoyable for me. Aron was the fun, best guy-friend who’s somehow ‘blossomed’ without Charlie noticing and Brooklynn was the self-assured, peer pressuring, flirts-with-anyone kind of girl. They’re third party friends each vying for Charlie’s attention. Being of the same social class, I thought they brought out a different side of Charlie, one that didn’t have to put up any pretence which gave them more realism.

The world here feels medieval under the rule of a queen and a severely enforced class system, but with modern aspects of technology infused throughout. It’s built up well through the first half, creating the air of danger that lies before anyone outstepping their bounds. The idea is an interesting one, creating a world where everyone is relegated to speaking certain languages that define their place in society. It touches briefly upon the philosophical issues behind the world the characters live in, contrasting the differences of what is to what could be through the use of secret nightclubs where as far as class is concerned anything goes.

The occasional switching of POV’s helped to fill the reader in on what was going on, creating the overall tension. But I felt that it gave away too much, rather than waiting for the main character to figure things out. While some of the twists caught me, others were a little obvious. The second half felt busier than the first with all the revelations being thrown at us, although looking back, not much really happened. The ending improved my feelings, but I don’t know how invested I am to continue with the series.

Recommended to:
Those interested in a medieval-ish dystopian with scheming and romance.