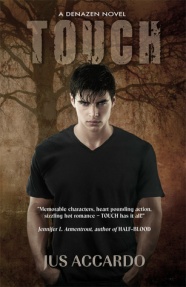 When a strange boy tumbles down a river embankment and lands at her feet, seventeen-year-old adrenaline junkie Deznee Cross snatches the opportunity to piss off her father by bringing the mysterious hottie with ice blue eyes home.

Except there’s something off with Kale. He wears her shoes in the shower, is overly fascinated with things like DVDs and vases, and acts like she’ll turn to dust if he touches her. It’s not until Dez’s father shows up, wielding a gun and knowing more about Kale than he should, that Dez realizes there’s more to this boy—and her father’s “law firm”—than she realized.

Kale has been a prisoner of Denazen Corporation—an organization devoted to collecting “special” kids known as Sixes and using them as weapons—his entire life. And, oh yeah, his touch? It kills. The two team up with a group of rogue Sixes hellbent on taking down Denazen before they’re caught and her father discovers the biggest secret of all. A secret Dez has spent her life keeping safe.

A secret Kale will kill to protect.

Final Thoughts:
Touch had everything I could have wanted. It’s wickedly romantic, while still managing to pound you with the action and wring you out with twist after twist. I’d liken it to a teen-focussed book version of the CW’s Nikita—evil corporation kidnapping and brainwashing recruits into thinking they’re doing good—well if the recruits had supernatural abilities. The prospect of a boy with a death touch drew me in, but it’s the bond between Kale and Deznee that really hooked me.

Kale’s got unnaturally blue eyes, well-built and overall dead sexy, but he’s also adorably innocent. Raised from birth inside the Denazen Corporation, the everyday workings of the outside world are a mystery to him. I loved this aspect. It made him so much fun to be around. He asks the most random questions that just make me smile, and he’s incredibly forthright. His simple outlook on the world was an interesting one – why isn’t there just good and bad, why are there levels? Plus, his take on kissing was just…*opens window*

I enjoyed the level of growth experienced in such a short number of pages. Kale has a tortured past to deal with as well as a worrying future. His adaptations to his new surroundings show through but he maintains part of himself in order to recreate himself as someone he’d like to be. He’s incredibly protective of Dez, which is sweet but also a little scary when he’s willing to kill any guy who even looks at her the wrong way. One touch from him and presto, the potential girlfriend stealer would shrivel up and die.

Dez herself isn’t a cookie-cutter YA protagonist. She’s sure of herself, knows she’s hot and uses it. When I found her ready to skateboard off a roof on the first page, I knew she’d be different. She’s anything but Daddy’s little girl, flipping him off every chance she gets. Personally, I thought her give-‘em-hell attitude was awesome. She’s the character I’ve been wanting to read. Dez is brimming with sarcasm, she’s sneaky and surprisingly industrious. I loved that she wasn’t a fall-head-over—heels-and-forget-the-world kind of main character. She had purpose and stuck to it.

The concept of Sixes—supernaturally enhanced people or whatever you’d liked to call them—really amped up the book’s potential. The possibilities there are endless, and Jus took full advantage of that. The evil corporation was set up well, creating the air of danger and the ever present possibility of things imploding around them. The building housing it all was a character in on itself. With sophisticated technology, hidden elevators, human lie detectors and identically dressed foot soldiers always circling, everything was painted with such detail.

The action was spaced throughout the whole book, rather than leaving it all to culminate in a clump at the end. Sure the end packed a wallop, but there was always something happening, always danger. The twists surprised me. There weren’t moments where you thought, ‘oh it’s about time for the twist.’ That’s what I liked about this, they just kept coming. You have to pay attention there’s always something going on. Picking three words to describe this book, I’d have to say Touch is adorable, deceptive and deadly.

Recommended to:
Those interested in a self-assured leading female, a cute guy who’d do anything for her, and an evil corporation trying to take over the world.