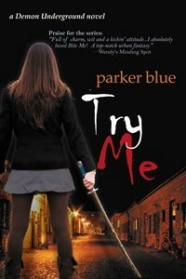 This part-demon teen vampire fighter and her faithful terrier hellhound are once again patrolling the dark city streets of San Antonio, Texas. Val’s hunky human partner, Detective Dan Sullivan, is giving her the cold shoulder since she beheaded his vampire ex-fiancée. Vamp leader Alejandro is struggling to keep the peace between vamps, demons and humans. The mucho powerful Encyclopedia Magicka has been stolen, someone in the Demon Underground is poisoning vamps, and Val’s inner lust demon, Lola, is getting very restless since Val’s now partnered with sexy Shade, the shadow demon with the blond good looks of an angel.

Final Thoughts:
Picking up soon after where Bite Me left off, it maintained the same feel while somehow managing to flip things, taking the characters in a new direction. Dan becomes a background character with Shade stepping up to fill his shoes in the leading guy spot. I wasn’t too fussed on the romantic shift as book one didn’t really focus heavily on it, leaving Val’s options pretty much open. The book’s overarching plot could have used a bit more meat though, with the Val and Shade scenes seeming to fill more of the page time then the actual problem that needed solving.

Fang, Val’s part-hellhound talking dog, was a favourite of mine last time around with his constant snark and ability to cheer Val up or put things to her straight. Unfortunately he seemed to mellow a little during this outing after another talking dog like him came into the picture. He still had the sarcasm going for him, and I liked his presence, but it didn’t work as well for me—maybe because he didn’t have as much time for her. I’ll have to see how I feel after the next instalment.

Dan was another character from the first book that dropped off, disappointing me. He was such a big part of Bite Me, not in a romantic sense – though there were hints at that, but in a general friend sort of way. So with him shoved to the sidelines, the dynamic they’d been building—that had been fun with their differing personalities—was just gone. In fact, looking back, lots of things from the first book got downplayed in the sequel, the whole special police aspect being one of them. Instead of Val & Dan out hunting vampires, the demons and their inner workings became the main focus.

Dan’s sister, Gwen, started to come out of her shell and became more of a character in her own right. She filled the girl-friend role with shopping, relationship and life advice when Fang happened to be off doing Fang stuff. The romance side, like I mentioned, took up a bigger chunk, getting more development. Shade’s a sweet guy, who likes her for her—including her inner succubus—unlike Dan. That pushed him way up in my book. It balanced it well shifting between the touching and kissing and providing insight into the backgrounds of their demonic abilities and weaknesses.

The demons played heavily into stereotypes based on their appearances, which probably made them easier to keep track of, but I would have like a little more subtlety. There were some that were harder to pick, and I enjoyed that. There’s another mystery going on which had me formulating my own theories – they were wrong though. I thought my own twist would have been cool, but I like being surprised, so that was a plus. There’s a lot more argument mediation going on rather than big brawls which is sensible in reality but I would have liked a few more vamp stakings.

Recommended to:
Those interested in a demon on demon romance with a mystery to solve.