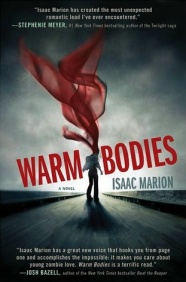 A zombie who yearns for a better life ends up falling in love—with a human—in this astonishingly original debut novel.

R is a zombie. He has no memories, no identity, and no pulse, but he has dreams. He doesn’t enjoy killing people; he enjoys riding escalators and listening to Frank Sinatra. He is a little different from his fellow Dead.

Not just another zombie novel, Warm Bodies is funny, scary, and deeply moving.

Final Thoughts:
Wow…yes…well…just…wow. R’s ellipsis fetish must have rubbed off on me a little. I know this title has been drowning in five stars lately, but it’s worth it. The narrative is a little jarring at first, thrust into the mind of a zombie ready for its next feeding, but what results is magic. With only 240 pages, Marion doesn’t waste his words. There are no lulls, only carefully crafted reams of character development. R is such a loveable zombie that you can’t help but feel for him even when he’s sneaking bites at a brain.

I set out trying to read this during an hour long car trip. On top of the conversation milling around me, I had the misfortune of familial interruptions every now and then asking me what I was reading. “Warm Bodies…no Grandma, it’s not erotica…maybe a dash of necrophilia…what’s that?…just, ah…never mind.” It seems they would have preferred the erotica, apparently zombies are too (pick your own ‘disgusting’ synonym). Just for that, I read aloud a line describing a bout of brain-eating. They blanched, but really, I didn’t think it was that gory.

Reading from a zombie’s perspective was a big culture shock. It’s very believable. The loss of identity, including their own names, even the ability to read or speak coherently, builds into the façade that zombies are nothing more than corpses. What we see though, show’s that they are anything but. I found the fractured speech jarring at first, but quickly came to embrace it. It provides a sense of tension on R’s part as his narrative is well articulated, he just can’t get the words out.

The death of Perry and the introduction of his girlfriend Julie is where the book pulled itself into something addictive and R really started to shine. It’s incorporated early enough that book doesn’t feel like it’s sitting around waiting for things to take off. But at the same time, it’s paced far enough in that we get to see just where R is coming from in order to contrast it with his changing nature. Going from eating humans one moment to feeling a need to protect one the next effectively spits the whole humans vs. Zombies predetermined nature on its head.

And that is what Warm Bodies is really about, change. R goes from a need to do something, to a want…a want to do something else, not what life has said he has to. He has a lot of emotion for someone unable to feel. He’s plagued with internal anguish over killing this girl’s boyfriend, not wanting to lose her if she finds out. R has the ability to connect of such a level. Without saying much, he says everything. I loved this gestures he resorted to in attempts to show Julie how he felt when his mouth wouldn’t abide. The constant shrugging and Julie’s responses to it was perfect. And the use of vinyl skipping in his aeroplane-turned-makeshift-apartment was just swoon-worthy.

The world built here is such a rich one. It’s easy to imagine these dilapidating bodies riding the escalators at an abandoned airport or the zombie-kiddies in “school”. The concept of memory stealing through brain consumption is a fun one as well as the seeming hierarchy the zombies submit to. The Boneys, zombies who’ve lost all but their bones, hold a stark glimpse at the inevitable future lying before everyone. On the human side of things, the world isn’t much better. Destitute, trapped within repurposed sports stadiums, life is clinging to a gun without much hope of a future.

The characters provide opposing views, some resolute with the state of the world and others wanting to change it. R and Julie have such an interesting relationship. Perry’s memories provide the initial spark, but R’s feelings ignite it. There’s the knowledge that’s he’d willingly put himself at risk in order to keep her safe that make it so much better than if he’d rushed into things half-cocked. Match that with the threads of friendship, inner struggles, hope and determination and you have something very close to breaching the L word. This is definitely a something powerful going on here. This is one book I can’t wait to witness in movie form.

Recommended to:
Those seeking a paranormal romance with depth. For a short novel, this one packs it in: action, struggles, humour, friendship and love.