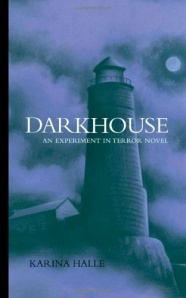 There’s always been something a bit off about Perry Palomino. Though she’s been dealing with a quarter-life crisis and post-college syndrome like any other twenty-something, she’s still not what you would call “ordinary.” For one thing, there’s her past which she likes to pretend never happened, and then there’s the fact that she sees ghosts. Luckily for her, that all comes in handy when she stumbles across Dex Foray, an eccentric producer for an upcoming webcast on ghost hunters. Even though the show’s budget is non-existent and Dex himself is a maddening enigma, Perry is instantly drawn into a world that both threatens her life and seduces her with a sense of importance. Her uncle’s haunted lighthouse provides the perfect catalyst and backdrop for a mystery that unravels the threads of Perry’s fragile sanity and causes her to fall for a man, who, like the most dangerous of ghosts, may not be all that he seems.

Final Thoughts:
After reading a book that dragged on, I was happy to find myself speeding through this one easily. I was surprised by how much I loved reading it. The similarities between my life and that of the main character, Perry, were freakishly uncanny. I enjoyed slipping into her world and going along with her sometimes wacky, but often understandable trains of thought. The mystery of the lighthouse had its creepy moments, but what I loved came more through the banter between Perry and Dex. The romantic undercurrents were paced realistically, and fun to watch unfurl.

We get glimpses into Perry’s waning work life as a receptionist, but not so far that it overwhelms the direction of the book. While Alana, the previous receptionist, and now her superior, was most likely a throwaway character, I enjoyed the tense dynamic between the two. Contrasting work-Perry—okay, so work-Perry isn’t that different—was family-Perry. Recovering from a weight problem in her high school years, Perry’s self-worth isn’t the greatest. She isn’t moping around being depressed all the time, but with a stick-thin fashion blogger little sister, it’s hard not to feel like life wasn’t just a tad unfair.

I cringed through the informal reunion with people from her past, having known those particular feelings all too well. I liked the way Perry’s history, including things that may have seemed inconsequential, later made an impact in parts of the story. The introduction of the lighthouse and Dex were handled well and really set things into motion. While I don’t think books can scare you in the same way watching a horror movie at night can, I did find the abandoned lighthouse eerie. It kept me reading through, wondering what the hell was going on. There was no way anyone could have paid me to do the things Perry did.

It wasn’t an overly paranormal book in the sense that their world felt grounded in reality. I was left wondering how things fit together, and what’s coming next. Dex, or Declan, was an interesting love interest. For the better part of the book I wanted him and Perry to hurry up and kiss, but then where would the tension be? There was no instaluv, and really, I had no idea how their connection was going to play out. For that, I really enjoyed it. Dex can be annoying, but he was usually a lot of fun. He pushes Perry’s buttons, checks out her ass, and makes her blush…frequently. While there is some understanding into Dex’s character, there looks to be plenty more to find. Considering the ending really didn’t leave things settled, I recommend having Red Fox handy to jump straight into.

Recommended to:
Those after a post-college ghost-blogger partaking in a semi-romantic/horror adventure.