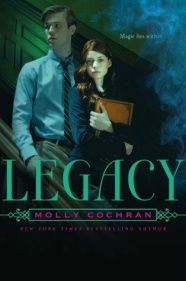 When her widowed father dumps 16-year-old Katy Jessevar in a boarding school in Whitfield, Massachusetts, she has no idea that fate has just opened the door to both her future and her past. Nearly everyone in Whitfield is a witch, as is Katy herself, although she has struggled all her life to hide her unusual talents. Stuck at a boarding school where her fellow studens seem to despise her, Katy soon discovers that Whitfield is the place where her mother commited suicide under mysterious circumstances when Katy was just a small child. With dark forces converging on Whitfield, it’s up to Katy to unravel her family’s many secrets to save the boy she loves and the town itself from destruction.

Final Thoughts:
Going into this, I was expecting another boarding school story. I’ve read a fair few of them this year and they all had a lot of things in common, so what actually came out of this one surprised me. Beyond the first few chapters, there are hardly any mentions of the school, instead, focussing on the fog-ridden town full of magic and darkness. I enjoyed the premise, but felt like the book dragged on for far too long. Spanning almost nine months in only the first half, things moved quickly, but it still lagged somehow. Thinking back, I enjoyed everything that happened throughout the book, I just felt depleted reading it.

The main character, Katy, really gets a raw deal, being tossed away by her father and sent to a boarding school so he can spend more time with his corporate bitch girlfriend. Her dad, and Mim, are easily hateable. I love when you can hate characters, rather than simply feeling indifference. Mim grated on me with her barely hidden aversion and constant mispronunciations of Katy’s name. Adding in her corporate bulldog persona, and she was very much a person that would send you into a fit of groans upon learning of her presence. Katy, her father and Mim, all developed further in their relationships as the book progresses; in fact, there is a lot of development all around. Tension, happiness, comedy and fear all play their parts.

I didn’t like the time slips between chapters. Most books skip periods of time, but this one took that concept further and skipped between months sometimes. Each chapter seemed to progress towards the next ‘witch holiday’. It worked at the start, during the school aspect of the book, showing the misery in her life only through glimpses, but later on I would have preferred to have slow things down a little. There were moments that provided the characters with a respite, but they were used fleetingly in progression of the plot.

The romance with Peter, for instance, was put through the ringer. His feelings and their sudden changes can be confusing at times, but even so, he was an enjoyable character. I wasn’t sure if the romance was meant to be the main focus, though. There were times when both Peter and Katy uttered the corniest of lines, but then others when they were solely focussed upon ridding the evil coveting the town and its people. This lack of focus may have been part of the reason I felt my connection with this book wavering.

The magic of the town really became the book, with so many characters besides the main two becoming involved in everything. Some of the twists were obvious and annoyed me in how they played out. But for the better part, the characters and their motivations made up for this. Some things I didn’t want to happen did, and others I did want, didn’t. Coming to the ending, I found it enjoyable, but was left slightly confused by the epilogue.

Recommended to:
Those after a magical story of evil and love.