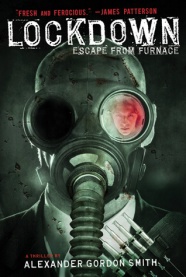 Furnace Penitentiary: the world’s most secure prison for young offenders, buried a mile beneath the earth’s surface. Convicted of a murder he didn’t commit, sentenced to life without parole, “new fish” Alex Sawyer knows he has two choices: find a way out, or resign himself to a death behind bars, in the darkness at the bottom of the world. Except in Furnace, death is the least of his worries.

Soon Alex discovers that the prison is a place of pure evil, where inhuman creatures in gas masks stalk the corridors at night, where giants in black suits drag screaming inmates into the shadows, where deformed beasts can be heard howling from the blood-drenched tunnels below. And behind everything is the mysterious, all-powerful warden, a man as cruel and dangerous as the devil himself, whose unthinkable acts have consequences that stretch far beyond the walls of the prison.

Together with a bunch of inmates—some innocent kids who have been framed, others cold-blooded killers—Alex plans an escape. But as he starts to uncover the truth about Furnace’s deeper, darker purpose, Alex’s actions grow ever more dangerous, and he must risk everything to expose this nightmare that’s hidden from the eyes of the world.

Final Thoughts:
It took me almost a week to read this. I was initially turned off by the first few chapters that I put it down and ended up reading three vampire books in the process. I came back to it, determined to finish it, and after the first hundred pages, surprisingly it wormed its way into my subconscious. I didn’t love the book, but it got addictive. It’s essentially Prison Break for early to mid-teens. It plays heavily on the male friendship aspect as the wrongly imprisoned try to deal with, and find a way out of, their new gritty, despair-filled futures.

The setting was developed wonderfully, building up the danger through both outward displays of violence and the more subtle. The mysteries behind Furnace are probably what help make it so intimidating. It’s easy to feel the tension that Alex does, but I found I found myself annoyed at some of his stupidity. The whole curiosity and the cat thing would probably suit him well. I get that being new, he wants to learn how things work, but there are safer ways to go about it.

Donovan was probably my favourite part of the book. The veteran amongst the inmates, he’d been imprisoned for five years and well and truly learned the way things worked, and how to stay breathing another day. His outwardly tough, affable on the inside persona warmed me to him. There were a bunch of others, but he held the strongest memory for me. There’s not a great deal of history given to the characters, but I think that’s more to do with the fact that they’re lives outside of Furnace are now non-existent. There’s no parole—you go in, you come out dead.

There is a lot of time spent showing the workings of Furnace, what they spend their days doing, the food, the guards, the creepy night monsters. The gang violence was another interesting addition. It’s weird thinking of a bunch of fourteen year olds going around knifing people. I guess that’s just the world in which these characters exist. While all of this did add to the world, it wasn’t until the second to last quarter that the escape in which the series is named after actually started to unfurl. This is where it got really addictive.

Something that just stood out to me while reading this was the fact that there are absolutely no girls in this book. Well, unless you count the minute appearance of Alex’s mother near the start. The way it’s written, it appears that the underground prison of Furnace is a one of a kind. Does this mean that slaughter craze sweeping the country is only affecting boys? Or maybe girls get a lighter sentence. Or weren’t we supposed to think of this.

Recommended to:
Those interested in boys fiction. It’s got violence, conspiracies and friendships. No romances in sight.