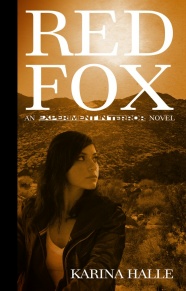 With Book Two of the Experiment in Terror Series, Perry Palomino and Dex Foray trade in the stormy Oregon coast for the unforgiving deserts of New Mexico.

In the for­got­ten town of Red Fox, a Navajo cou­ple is tor­tured by things unseen and by motives unknown. Wild ani­mals slink through their house in the dark, a bar­rage of stones pound their roof nightly, and muti­lated sheep car­casses are turn­ing up on their prop­erty. Armed with a cam­era and just enough to go on, Perry and Dex travel to the des­o­late locale, hop­ing to film the super­nat­ural occur­rences and add cred­i­bil­ity to their flail­ing web­cast. Only their show has a lot more work­ing against them than just grow­ing pains. Tested by dubi­ous ranch hands, a ghost from Dex’s past, and shapeshift­ing decep­tion, the ama­teur ghost hunters must learn to trust each other in order to fight the most ancient of myths…or die trying.

Final Thoughts:
Seriously loving these books. The series format allows for many new settings, new characters and new stories. Perry and Dex hold things together, being at the center of it all. Their relationship, or rather non-relationship, has progressed slightly from its beginnings in Darkhouse. I was both frustrated and happy with the pacing at which things moved in that regard. I know I said in my last review that books didn’t have the same scare factor that movies did, but this one pushed things closer. The paranormal has been amped up and so has the danger. Red Fox is one creepy book!

While I enjoyed getting to know Perry, her family and her life in the first book, I appreciated that this one spend less time in getting into the heart of things. I recently read a book set on a ranch and I thought that may have been why I didn’t like it, but this one managed to make the outback exciting. We’re introduced to five or six new characters early on, although the majority of the dialogue stays between Perry and Dex. With lots of paranormal activity going on, you have to pay attention to suss out what’s going on. These guys are definitely danger magnets.

Adding Maximus, Dex’s ex-friend from college, to the mix made things interesting. I think there could have been more of him throughout the book, but perhaps I’ll see him again in later instalments. He felt like a potential love triangle occupant, although, with things the way they are with Dex, who knows. The fact the Max is a ghost mediator was intriguing. I’m thinking he could prove useful on their expeditions, although he’d probably get paid better working as a medium.

Dex, who has been mostly snarky, cheeky and pushy, went through a bit of a change in Red Fox. It was one for the better, at least that’s the impression I gathered. He’s still very mysterious. With Maximus, we do get some insight into his past, though. While I like the thing growing between him and Perry, I’m left to wonder where his Wine Babe girlfriend, Jenn, fits into all of this. Unless he’s chopping their filmed footage to pieces, she must be able to gather that there’s something going on. I’m waiting for the day their Perry-strained relationship implodes.

Recommended to:
Those after a creepy paranormal with hints at a romance.