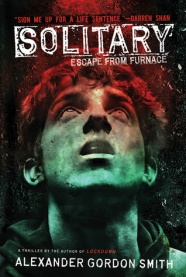 Alex tried to escape.
He had a perfect plan.
He was almost free. Even felt the cool, clean air on his face.
Then the dogs came.
Now he’s locked in a place so gruesome—so hellish—that escape doesn’t even matter.
He just wants to survive.

Final Thoughts:
With the amped up cliff-hanger ending of Lockdown, this one had its work cut out for it. You could probably gather the direction the series is headed just by looking at the titles, so it’s hard to root for the characters when you know their most likely going to fail, but nonetheless, I’m finding myself thoroughly enjoying these books so far. Solitary is fast-paced, gritty and emotional. The plotting is smart and so are the characters. I like their ingenuity in the face of seemingly insurmountable odds. I’m just waiting for the day when Alex finally sticks it to the powers that be.

Even though the book is set with Alex locked inside a coffin sized hole, aptly called “The Hole”, it actually has a lot more to it than just a boy staring at the darkness engulfing him. But still, I did enjoy Alex’s alone time as he fought a losing battle against the crazy trying to overwhelm his sensory deprived mind. The delusions Alex had of his old cellmate, Donovan, were probably my favourite character interactions of the book, even if they were only in his mind. He was the older brother figure in Lockdown, one that I liked perhaps more than I did Alex, so it was let down that we didn’t get to see more of him this time around.

The friendship with Zee throughout didn’t get a lot of development beyond that of the first book. It was what it was. The two boys, both in the same position, seemed different though. Alex has the leader quality about him, even if he doesn’t always want it. I wouldn’t mind seeing inside of Zee’s head, just to find out how he’s coping with everything that has happened to him. I though the Code that the boys picked up to communicate whilst in separate “Holes” seemed tedious, but was smart considering little alternatives they had.

The adventures with the new character, Simon, broke up the solitary confinement regime and probably created the majority of the book’s tension. Having already explored the “top” of the underground prison while in general population, rather the revisiting the same things again, it used the page time well in investigating what lay beneath, and any other possible escape routes that may have been untapped. With the mystery behind the creatures slowly being unveiled, there was more added that only sought to keep me guessing.

My emotions were tapped as the book once again picked up the pace towards the end. I can honestly say I have no idea how this series will resolve itself. I know what I want to happen, but Smith seems to have no problem with tearing the reader up inside. It wouldn’t surprise me if this one ends up with a bittersweet ending as just when you think something good may happen, something always ruins it. But then again, I love all of the twists—a happy ending this early on wouldn’t make for an exciting series.

Recommended to:
Those after a girl-free novel full of action, pain and conspiracies.