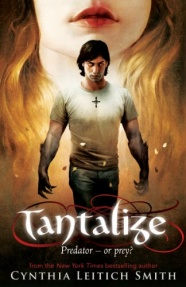 This is a terrific teenage gothic novel – vampires and werewolves abound! Orphaned and in her uncle’s care, fiercely independent Quincie may be the most over-achieving high-school student around, but even she has her hands full with a hybrid-werewolf boyfriend and the opening of Sanguini’s, her hip vampire-themed restaurant, which turns out to have way more bite than she’d intended.

Final Thoughts:
Things started out okay, but went downhill the further I progressed. While I found it to be a quick read, the main character, Quincie, continually frustrated me with her poor decision making and general lack of observation skills. Also, the sudden renaming of a person just felt weird. Using a stage name in front of the customers is somewhat understandable, but in everyday reference to the guy, I just couldn’t wrap my head around that one. Kieren, the half werewolf, was about the only sensible, almost likeable character out of the lot—yet he was hardly around!

The book is very restaurant-focussed. The majority of the book takes place within its walls. There’s lots of work to be done with the replacement chef coming in just before the reopening of their Italian-turned-vampiric-themed restaurant. It’s different, and does have its enjoyable moments. I liked Quincie’s interaction with the sign-waving homeless man. Being that Quincie’s parents are dead (yes, this happens in just about every YA book), she’s raised by her almost-thirty uncle. I would have appreciated more depth into his character, but then he was too preoccupied with his vampire-wannabe girlfriend.

The Henry-renamed-Bradley plot became the center of the book, which I didn’t particularly enjoy. Too much time ended up being spent with him and Quincie prepping the restaurant (and Brad) for its reopening rather than worrying about the murders going on in the city or the problems in her personal life. Bradley was obviously brought in to fill a love-triangle quota, yet there’s hardly any time spent developing Kieren beyond the fact that Quincie’s been crazy about him practically since birth. But in saying that, I still found Kieren more likeable.

Occasionally, I had a problem with the writing. When it came to the dialogue, there were times when there wasn’t much in the way of descriptors setting the scene. It was as if the reader was supposed to know what was happening, or what the speaker was referring to. I was able to pick up on what she had meant after the fact, but I’d prefer it if that weren’t required of us. In terms of plot movement, I actually liked the final quarter. Things picked up and twists were thrown at us. I’m interested in how things will eventually pan out, so I’ll be continuing with this series. Hopefully there will be more Kieren time.

Recommended to:
Those interested in a behind-the-scenes look at a teenage girl attempting to run a vampire-themed restaurant.