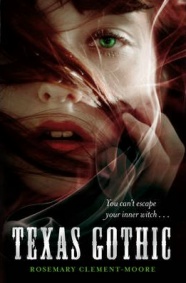 Amy Goodnight knows that the world isn’t as simple as it seems—she grew up surrounded by household spells and benevolent ghosts. But she also understands that “normal” doesn’t mix with magic, and she’s worked hard to build a wall between the two worlds. Not only to protect any hope of ever having a normal life.

Ranch-sitting for her aunt in Texas should be exactly that. Good old ordinary, uneventful hard work. Only, Amy and her sister, Phin, aren’t alone. There’s someone in the house with them—and it’s not the living, breathing, amazingly hot cowboy from the ranch next door.

It’s a ghost, and it’s more powerful than the Goodnights and all their protective spells combined. It wants something from Amy, and none of her carefully built defenses can hold it back.

This is the summer when the wall between Amy’s worlds is going to come crashing down.

Final Thoughts:
I was expecting something a bit more witchy. Instead, the books spent the majority of its time digging up bones, literally. It took me almost a week to get through this one, which is partially why I rated it as low as I did. The other reason stems from the fact that plot left me confused as to where it was going, what was important, and generally underwhelmed. It wasn’t all bad though, the characters had their fun quirks and nuances, which in a different plot probably would have really interested me. There’s also a cute cowboy next door reigning in the romance front. Definitely for those who enjoy the “I hate you.” “No, I hate you more.” types of romances. Lots of tension!

Even though the main character, Amy, and her family are considered witches among the locals—her sister, Phin, taking every opportunity to perpetuate that image—there was nothing downright magical going on, more like hints at it. I felt like the bone excavations, the ghost hunting, it could have been more exciting if there were more to it than just taking a few photos with a paranormal sensing camera and a voice recorder. I get why they don’t do things like that, it wouldn’t fit in with their established characters, but it’s just a personal thought of mine.

While others may enjoy it, I found the ranch setting for almost the entire book to be a little lacklustre. There are family feuds, and local law enforcement that think they own the town, generally things that didn’t interest me. I came to long for any little trips that took Amy somewhere else. It just felt like I was always waiting something big to happen, something more than just finding bones in a paddock and trying to figure out if they’re connected to a ghost that’s been hanging around. Things eventually picked up towards the end of the book, but not in a direction I’d been hoping for.

Like I’ve mentioned, it was the characters that were this book’s saving grace. Amy and Phin had a great dynamic between them. It’s easy to sense their sisterly bond. I loved Phin and her intellectual put downs. She speaks her mind and doesn’t care about the repercussions. I also liked the building romance between Phin and one of the guys on the dig team. It’s good when the main characters aren’t the sole focus in those regards.

In fact, I enjoyed a lot of the scenes between the gang of university students that made up the dig team. But the romance with Ben had to be my favourite part of the book. I don’t know why I enjoy these types of guys, they’re so rude, but you can tell there’s more behind it. Ben and Amy (Secret Life of the American Teenager anyone?) were always at each other’s throats, Ben blatantly against the whole ghost thing and Amy, well, stuck in the middle of it. The moments where Ben shows his caring side, and his lust, made up for his other deficiencies.

Recommended to:
Those after a mystery surrounding uncovered bones, ranches, feuds and a ghost.