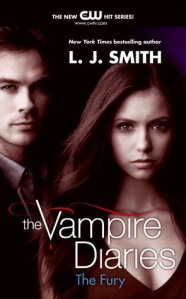 Elena: with Damon at her side, and wild with her craving for blood, the changed Elena struggles to control her desires.

Stefan: tormented after losing Elena, he will do anything to get her back. Even if it means becoming what he once despised. . . .

Getting what they want may come at a deadly cost.

Final Thoughts:
Just about everything I had a problem with last time around was addressed in this third instalment. The characters evolved, there was real tension, and basically the plot just got better. The last book served its purpose in advancing the overall direction of the series, but in terms of my own personal enjoyment, there was no contest, I couldn’t put down the The Fury. A lot of the teen angst that had plagued Elena faded with the advent of greater problems. Damon’s gradual change also played a part in my enjoyment. While I love evil Damon, semi-good but snarky Damon is just as fun.
Just a warning, there are spoilers for the previous book ahead.

Elena’s transition to vampire at the end of the last book kind of came out of nowhere having watched the TV series before reading the books. TV Elena is adamant about remaining human, and I suppose the book one was too, but I enjoyed seeing her reaction to it, and how she adjusted to her new life. I think the change in species actually improved her character. Before, she tended to be stubborn, spoilt, maybe a bit on the side of reckless. She hasn’t had a lobotomy or anything like that, she’s still got her personality, although she seems to think things through more thoroughly and make some better decisions.

Damon and Stefan, while still at each other’s throats, became slightly less arduous with Elena playing mediator between the two. Damon throwing jabs at Stefan, tempting Elena to the dark side, while showing little signs of affection towards her through the subtlety of his actions. The Stefan/Elena romance took the backseat with everything else going on around them. The feelings were still there, but it wasn’t an in-your-face romance. It didn’t really feel like it lacked on that front though, the exciting plot more than made up for it.

With suspicion being thrown in all directions, it kept me guessing as to what was going on in the small town. Elena and her friends are playing detective, trying to figure out where all of the evil is coming from. Elena’s ‘town dead girl’ vampire state added in a lot of hurdles, plus some advantages. Alaric’s presence in the last book actually made more sense, which I’d been expecting. He was mentioned far too often in The Struggle to be a throw away character. I really enjoyed Matt again, but there needs to be more of him. I don’t see it happening, but I can dream.

The danger felt real this time, not just worrying about a stolen diary. I really enjoyed the twists and all of the detail that has been woven into the series. It is enjoyable seeing the tiniest of things come back and actually have a greater meaning. Just like the previous books, this one doesn’t fail to pack plenty into the ending. I’m really intrigued to see where it’s going to go from here.

Recommended to:
Those after mystery, action and hot vampires.