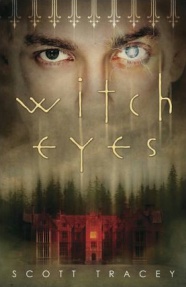 Seventeen-year-old Braden was born with witch eyes. He has the ability to see the world as it truly is: a blinding explosion of memories, anguish, darkness, and magic. The power enables Braden to see through spells and lies, but it comes at the cost of horrible pain.

After a terrifying vision reveals imminent danger for the uncle who raised and instructed him, Braden is lured to Belle Dam, an old city divided by two feuding witch dynasties. Rival family heads Catherine Lansing and Jason Thorpe are desperate to use Braden’s powers to unlock Belle Dam’s secrets, but Braden refuses to become their sacrificial pawn.

To stop an insidious dark magic from consuming the town, Braden must master his gift—even if the effort destroys him.

Final Thoughts:
It goes to show what not reading blurbs can do to you. Based on the cover alone I was expecting something heavy in fantasy, but instead found a book full of teen drama, town-wide family feuds and an underbelly of magic. That’s a good thing, though. It was exactly the kind of book I felt like reading. It was actually lucky that I skipped the blurb, too. The last few lines of it have some of the twists detailed (I’ve removed them from the blurb above). I loved that I managed to fly through this one, staying up til 4am because the chapter endings just wouldn’t let me put it down. With a fun collection of characters including new friends, new boyfriends and frustratingly power-crazy adults, Witch Eyes is one series I’ll definitely be coming back for.

Braden’s considerably well adjusted for a seventeen year old boy raised basically in isolation out in a Montana log cabin by his witch uncle. Events conspire and he soon ends up in Belle Dam, a town ruled by two warring witches. It didn’t really waste time getting interesting, throwing in cute, but douchey guys left and right. The romance is still great, but I’ll get to that later. I liked that he’d learnt how to deal with high school from watching TV shows, but still, being home schooled all his life, I’d expected maybe a bit more culture shock from him. Regardless, the personality he ended up with was great—snarky, magically-empowered, but full of tension.

The friends Braden makes, like the people of town, are not too fond of each other. This added to Braden’s problems and made things a little more interesting. While I didn’t feel overwhelmed by the amount of time spent on the high school-ness, its inclusion did help with the relatability in the magic-infused world. I liked Jade despite her popularity. One minute she could fill the stereotype perfectly and the next, do something that completely betrayed it. For me, I felt like Riley could have been explored further as we didn’t get a lot out of her. But I guess there’s always time for that in the next book.

I do admit I was a little confused as to where the plot was going. It seemed to be an internal war Braden was fighting over who he was supposed to avoid, who to ally himself with, what to keep to himself, what his purpose was, what everyone else’s purposes were…oh and how to deal with the hellhounds looking for him. It never felt slow though, with the characters always up to something. I guess it really works well on the mystery around it all, so again, if you haven’t already, avoid the blurb. Another thing I found myself trying to wrap my head around was the random blobs of words whenever Braden used his ‘witch eyes’. They’re in italics to separate them from the rest of the text, but I still found myself having to re-read over them occasionally, trying to gather their meanings.

Now back to the good stuff—Trey and Drew. While this book didn’t explicitly have a love triangle, I had a niggling feeling like it might be headed that way. Trey’s annoying, Braden sees it, everyone does. But I always seem to find myself liking those types of characters. He’s the kind that pushes your buttons until you do what he wants. What I liked about this was that Braden pushes back. With mood swings galore, prepare for some frustration. There are plenty of ups and downs that make it worth it, though—especially one particular scene up in a tree. With Drew, I’m not quite sure how to describe him. There’s definitely something appealing about him, but he’s just as hard to pin down. I can’t wait to see where Demon Eyes takes things next.

Recommended to:
Fans of the Morganville Vampires series may enjoy this—they both work upon the close-knit supernatural town idea.