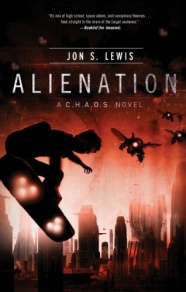 The invasion was only the beginning . . .

After his parents were killed in a car accident, Colt McAllister was drawn into a world he thought only existed in comic books-one where mind control, jet packs, and flying motorcycles don’t even scratch the surface.

Along with his best friends Oz and Danielle, Colt is now training at the secret Central Headquarters Against the Occult and Supernatural academy. But strange accidents seem to follow him. . . even with the security of the school grounds. What first seems random soon turns deadly. But who is targeting Colt?

As the alien invasions increase in frequency and force, C.H.A.O.S resources are taxed to the limit and they’re forced to utilize the new recruits. In the midst of battle, Colt will discover some startling revelations . . . about himself, his friendship with Oz, and why he has been chosen to defeat this alien attack against earth.

Final Thoughts:
Compared to the first book, this one lacked a little something. The characters were still just as fun, showing the strengths and the weaknesses in their friendship, but it felt like things could have been taken further. The resolutions to some of the books plot points came a little too easily for me. Personally, I felt like the first half of the book could have been shortened to allow for more time spent at the actual CHAOS academy rather than waiting so long to ship them off—CHAOS was where all the excitement was. Though, for those not particularly interested in boarding school novels, they may enjoy the prolonged transition.

Again, Colt’s brothers made no appearance. I’m not quite sure why he has so many of them if we’re not going to see any of them. That aside, Colt and his grandpa do see some progression in their relationship this time around as secrets are revealed into why Colt, a sixteen year old, is so important to the CHAOS organisation. I’m a little confused as to the Lily storyline, and why the romance is being pushed when it doesn’t seem to be going anywhere. I’m hoping for some type of twist to result out of that somewhere along the line in this series.

Dani steps up this time, getting even more time with Colt than Oz does. I enjoyed their alone time, even though it’s constantly reinforced that nothing romantic is going on between them. The insights into their childhood friendship added a little more depth to their recently reignited friendship. As for Dani’s hacker skills, I felt they were underutilised in comparison to Invasion. They weren’t non-existent, but most of what she happened to be up to was behind-the-scenes. I think that was due in part to Colt spending a lot of time facing things on his own.

The technology kept up, once again introducing new gadgets such as scanning goggles and hoverboards—which Colt takes a quick likening too after being surf deprived—as well as naming a lot of different guns. There was also a cool video game simulation, one of the highlights of the book. I liked that the CHAOS academy was co-ed, with girls just as enthusiastic as the boys. It has the makings of a fun boarding school novel, packed with alien fighting action. Although from the preview for book three, it seems like it may be going in a new direction again.

I thought the idea of a virus spreading throughout the world, one that kills its victims in fourty-eight hours, was a really interesting plot idea, similar to that of Marissa Meyer’s Cinder—especially when there’s no known cure. But the way it was executed left me feeling like its potential was wasted. What could have provided lots of tension, ended up being resolved almost immediately. I’d be impressed if this somehow ended up being a red herring, causing greater problems in the next book, but I guess I’ll just have to wait and see.

Recommended to:
Fans of the Conspiracy 365 series would probably enjoy this alien invasion action series.