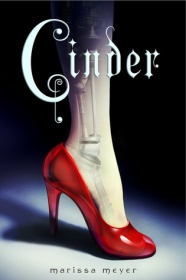 Humans and androids crowd the raucous streets of New Beijing. A deadly plague ravages the population. From space, a ruthless lunar people watch, waiting to make their move. No one knows that Earth’s fate hinges on one girl. . . .

Cinder, a gifted mechanic, is a cyborg. She’s a second-class citizen with a mysterious past, reviled by her stepmother and blamed for her stepsister’s illness. But when her life becomes intertwined with the handsome Prince Kai’s, she suddenly finds herself at the center of an intergalactic struggle, and a forbidden attraction. Caught between duty and freedom, loyalty and betrayal, she must uncover secrets about her past in order to protect her world’s future.

Final Thoughts:
I haven’t had the best of luck with retellings in the past, but with Cinder, I couldn’t get enough. I attribute that in part to the skilfully crafted futuristic setting of New Beijing. Infusing a wide range of speculative technology with an atmosphere that somehow managed to feel both advanced and primordial at the same time gave the book an intriguing hook. The way the main twist was handled let things down for me. I liked the twist, but the hints were too obvious. Still, Cinder drew me in, displaying multiple facets of her character as she balanced between her headstrong ferocity and self-deprecating withdrawal from the world.

More than a girl looking for her fairy-tale romance, Cinder opens with a part human, part robotic girl changing her small foot out for a more comfortable one. As such, she’s very handy with a wrench, so far so that she has a rep as the best mechanic in New Beijing. I personally loved Cinder’s attitude—even though she did choose to hold things in at times—her sarcasm was nothing short of awesome. Fitting in with the variations of the tale, it manages to modernize the familial situations and the characters without seeming corny. In fact, the technologies as well as the setting threaded through the story actually cause things such as the mother’s bigoted hatred towards her stepdaughter to make more sense.

I was happily surprised by the interwoven plots of both Cinder and Prince Kai. The perspectives switch between the two of them, although Cinder takes priority for most of the book, gaining control of the headspace whenever both she and Kai are in a scene. Kai’s POV brings in the political angle to the story, which I enjoyed to an extent, but I much preferred watching his attempts at flirting with Cinder—the two of them were full of sexual tension. The idea of a deathly plague spreading throughout the world was actually quite interesting for a background plot. It was introduced in a way that exhibited its seriousness, and I liked that.

I’m not sure if it was just me, but I picked up on the twist right at the beginning, and became increasingly more confident that I was correct with my assumption with each hint that was given. I desperately hoped that I was being tricked and some massive twist was going to come out and tell me I had it all wrong, but unfortunately that wasn’t the case. It wasn’t that it was a bad twist, I actually liked that it was true, but I would have preferred experiencing the shock of finding out at the end. Instead, I just groaned.

I didn’t pick up on everything though, so I did get some good surprises. And like most books, a lot of it came in the final quarter. With people still dying of the plague, political scheming in full swing, a bitch of a stepmother doing everything to ruin Cinder’s life and a royal ball going down, there’s tension running wild. I loved some moments and I hated others, but being the first book in the series, I’m guessing riling up the readers with that ending was the intention. It definitely leaves you wanting book two already.

Recommended to:
Those interested in romantic dystopians with aspects of sci-fi. It reminds me of The Demon Trappers series mixed with The Pledge.