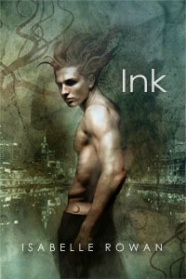 Roman centurion Dominic drew his last human breath during the time of Hadrian. In the centuries since, he’s seen much of the world change around him, but the vampire finds himself held captive in Melbourne, Australia, by his fascination with young, passionate, fun-loving, and alive tattoo artist Michael Chapman. Unable to resist the lure of Michael’s beauty, Dominic finds himself entering the parlor to get a tattoo he knows will fade.

The attraction he feels only grows, and despite Dominic’s extreme reluctance to get involved with a human, he and Michael form a bond—a connection that all too soon attracts the attention of a dark specter from Dominic’s bloody past. Soon, a dangerous game of cat and mouse threatens not only the budding romance, but also their humanity.

Final Thoughts:
This one left me feeling a little mixed as to whether I liked it or not. There were moments where I couldn’t get enough of Michael and Dominic’s growing relationship, and other times when I wished something would hurry up and happen. I enjoyed the first half a lot more than the second half of the book. The introduction of Dominic’s psycho ex, and maker, took the book off course, becoming more focussed on the past than on the interesting changes going on in the present. The Australian setting was a welcome change, providing enough of a description without becoming lost in the words.

The getting-to-know-you stage is where a lot of the fun exists. Dominic’s loneliness, and his attempts to fill it with the touch of a young tattooist, even if it was only while getting a tattoo, was enjoyable in that it showed the slow beginnings of what was to come. It gave off a tinge of bittersweet as Dominic waged an internal war. Not wanting to be alone, but not wanting to damn another the way he was. The good thing about books is that you know any struggles this early on are going to be thrown to the wind as the characters are in search of love.

The perspectives in this book are constantly shifting back and forth within paragraphs, giving the reader insight into what each character is thinking or feeling. I’m not particularly fond of this writing style, but I quickly became used to it. The friendships between Michael and the other people he works with at Ink showed their importance as the book progressed. The book had interesting themes, displaying what it means to be human. While it didn’t delve deep into this, it did try to show the emotional, as well as the primal, struggles that vampires went through after their change.

As I’ve mentioned, Galen, aka psycho ex, was what brought the book down for me. I know he needed to be there to test the relationship and to provide obstacles and allow for revelations, but my enjoyment level fell considerably as I was annoyed by all of the interruptions. Insights into Dominic’s past did highlight the differences between him and Michael, but the flashbacks could have been shortened to keep the reader in the present where the actual interest was. The Melbourne setting, the trams, the nightclubs, Chapel Street, and the tattoo parlour…especially the tattoo parlour—I loved all of that that. Overall, the book was still enjoyable, but I had to deduct half a star for the detour it took.

Oh, and while this has nothing to do with the content of the book, I just thought I’d mention, this one has one of the best Dreamspinner cover arts I’ve come across.

Recommended to:
Those after a vampire romance with jealous exes and learning about one’s self.