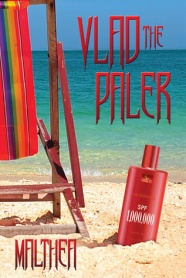 When half-Korean sci fi-fantasy gamer nerd Cyrus Gae goes out clubbing on his first night of vacation, he’s not expecting to be bitten by a vampire. Not in Florida, the land of sunshine and Mickey Mouse. He’s not exactly averse to being a creature of the night, but he’s righteously pissed off about the vampire’s cavalier eat-and-run attitude. Determined to track down Troy, the bloodsucker who turned him, Cyrus takes the name Vlad and begins a search that will take him to leather bars, vampire dens, and cyber cafés.

As Cyrus hunts the elusive vampire, he meets Logon, the hipster/geek love of his afterlife; Vinnie, his Girl Friday the 13th; and even an intersexual voodoo queen, while learning that being a supernatural bad-ass isn’t quite what he imagined. In fact, hardly anything is what it seems, and Vlad finds himself in the middle of an intrigue involving Florida’s master vampire—who isn’t thrilled about Vlad’s sudden appearance in his domain. With powerful forces aligning against Vlad, he’ll have no choice but to become the hero he never wanted to be if he wants to keep his beloved Logon safe.

Final Thoughts:
This is the weirdest book I’ve read. I liked the premise, but the execution was just very out of left field. It kind of feels like some of the fan fiction I’ve read in a way. It has that tendency to break the fourth wall at every opportunity, like the main character is giving a tour while he’s running around looking for a rogue vampire. The characters were fun, very quirky, but a little unhinged. There was definitely a heavy case of instaluv going on, with the two main characters professing their love countless times throughout the duration of the book. Oh, and for those that are interested—there was plenty of sex.

I’m going to keep this review fairly short as I just feel confused over this one. It actually had fairly intriguing paranormal backdrop, full of wealthy vamp enthusiasts, douchey vampires, witches, and a shifter who talks in riddles. The broken speech used by some of the characters annoyed me, but it did seem to fit with what the author was going for. Also, there was just too many lines that made me cringe. Coupled with the countless abbreviations the main character used, yet didn’t explain, it left me feeling disconnected from the story.

The sudden acceptance of vampirism by just about every mortal in this book seemed unbelievable. There weren’t any freak outs, things just progressed like it was the norm. I did like that the twist managed to catch me off guard. I probably should have picked up on it, but I’m glad that I didn’t. It made the book somewhat worth the read. The final ten percent of the book felt like an extended epilogue, showing us a flash forward ending, giving a very detailed conclusion. Though this book wasn’t for me, if you’re in the mood for erotic, and slightly nerdy, vampire wackiness, you might enjoy Vlad The Paler.