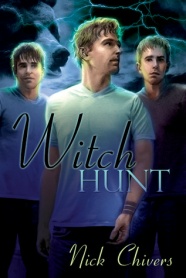 Mike thought he could escape his past. He renounced his crown as High Mage of The Council, had the Bands of Binding placed on him, and tried to start over as a normal human.

It didn’t work. And now a part of that past wants him dead, and Mike is running for his life.

With his best friend, Andrew, and Andrew’s soulbound partner along for the ride, Mike can’t help but feel lonely until he meets Rick, an all-around gorgeous man who might just be the wrong guy—again—especially since Mike can’t shake an ex-lover who’s hoping for a second chance. It’s a lot to deal with as demonic forces pursue him from Mongolia to Brazil, but Mike has to make it to the safety of The Council if he doesn’t want to be the prize trophy at the end of this witch hunt.

Final Thoughts:
I wanted to like this one, but I just couldn’t get into it. I persevered through it all and made it to the end though. I suppose it follows the title, with the three witches constantly on the run from whoever is chasing them, but personally, I don’t think adventure books are my thing. I did enjoy some of the scenes in the beginning as we were introduced to the boys and their magical heritage, but the second half was a mess with way too many supernatural abilities brought in, sudden (and unbelievable) love proclamations and resolutions that came too easily.

With his best friend, Drew, coming back into his life out of the blue, his soul-bound boyfriend in toe, Mike is more than a little irritated at the reminder of his seemingly perpetual single-dom. Drew and Jerome bring in the romance, but it feels slightly disconnected as the reader is experiencing it from an external viewpoint. I guess that is the point though. Jerome was likeable, if not for the reason that he was trying to be. The shopping trip bonding session, the staged fighting in public and the magical curiosity of Jerome were a lot of fun. It was once the three of them started traipsing all over the world that things deflated for me.

Beyond the terrible event in Mike’s past that led to his magical binding, there isn’t a lot more explored in his development, and there is virtually no history given to either Drew or Jerome. The introduction of additional characters throughout the book helped build upon their initial characteristics, but I felt like the emotional breakthroughs were rushed. The romance could have been handled better—there were moments when I was starting to enjoy the direction things were headed—though the notions of fate and destiny brought that crashing to a halt. Not my thing.

Somewhere towards the end, the writing changed from past to present tense for about a page—I think that may have had something to do with one of Mike’s many powers, or at least I hope so. I would have preferred more time spent on the villain as the concept behind him was interesting. I had issues with the way things played out, as it could have been spread out further, rather than being rushed in the way that it was. I think that’s due in part to the lower page count and the amount of time spent with the characters on the run—it doesn’t leave as much room for the actual confrontation. Still, it does manage to tie just about everything up with the exception of the anagrammed twins—although in that regard, you can probably guess. It looks like there might be a sequel based on the epilogue, but I don’t think I’ll be checking that one out.

Recommended to:
Others may find something enjoyable in this one that I missed, but for me, it just wasn’t my kind of book.