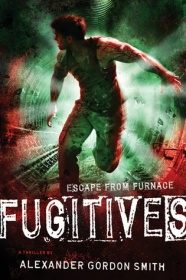 Forever altered by his experience in Furnace Penetentiary, Alex has done the impossible and escaped. But the battle for freedom is only just beginning. Charged with his superhuman abilities, Alex must uncover the last of Furnace’s secrets—the truth about the man who built the prison, the man known as Alfred Furnace. And to do that he must stop running and finally confront his greatest fears.

Final Thoughts:
I love the progression this series has. The first three books built up the prison life, the beginnings of the escape, and Alex’s transformation, and their actual breakout from Furnace. Fugitives continues directly on, showing that the escape was barely the beginning of Alex’s story, and I love that. It maintains an edge of danger, with the three friends on the run from police, gun-toting choppers, and scientifically enhanced humans that more resemble rabid animals. And finally, there’s a female character. It was a gripe I had with the prior books—there were no female inmates, or even a mention of a female prison.

There is plenty of action and serious problems throughout this book, but it couples it with humour, and reminders of friendship. Alex, having become reliant on the Warden’s ‘nectar’, a substance that empowers and also brings out one’s desire to crush those weaker, is changing slowly each time he taps into that ‘power’. The idea of the main character, the hero, turning bad, was used a lot in the last book, so this time it became less of a focus, and more of a background issue that the characters tried to forget about.

The settings used each brought out different aspects of an escapee on the run: the initial relief, to the practicality, to desperate fleeing, and even reasoning. It was interesting seeing the depths that people can go to in certain situations. Upping the stakes, the extent of the breakout on society made the book look more like High School Of The Dead than Prison Break. I found this a really fun concept to explore, and I can’t wait to see how it extends into the fifth book.

Zee didn’t get as much page time as in previous books, with Alex internalizing more than usual. But I add in the fact that Zee pretty much cozied up to the girl, being that he was the only non-surgically enhanced boy amoung the three of them. The final stretch brought in a heap more action, offering a showdown of sorts. Things were getting a little weird for me by that point, though. I was getting visions of FMA’s Edward Elric and a homunculus—still, it surprised me with its twists, and urged me to come back for more.

Recommended to:
Those who enjoy action, fringe science, and prison breaks.