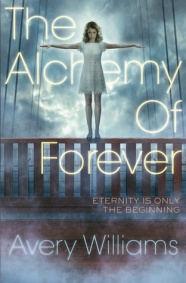 After spending six hundred years on Earth, Seraphina Ames has seen it all. Eternal life provides her with the world’s riches but at a very high price: innocent lives. Centuries ago, her boyfriend, Cyrus, discovered a method of alchemy that allows them to take the bodies of other humans from jumping from one vessel to the next, ending the human’s life in the process. No longer able to bear the guilt of what she’s done, Sera escapes from Cyrus and vows to never kill again.

Then sixteen-year old Kailey Morgan gets into a horrific car accident right in front of her, and Sera accidentally takes over her body while trying to save her. For the first time, Sera finds herself enjoying the life of the person she’s inhabiting–and falling in love with the boy who lives next door. But Cyrus will stop at nothing until she’s his again, and every moment she stays, she’s putting herself and the people she’s grown to care about in danger. Will Sera have to give up the one thing that’s eluded her for centuries: true love?

Final Thoughts:
A different take on reincarnation is always welcome, and while this one is certainly unique, it didn’t feel substantial enough to grip me. That’s probably due in part to the short page count. Things don’t really get a lot of focus time, instead, giving us brief moments for each part that Sera comes to understand while living her new life as Kailey. I think the most time was actually spent on the setup. It felt like it took forever for the plot to get underway, and when you know what’s coming, based on the blurb, that’s when long beginnings can be a mistake. I did still enjoy the short time spent with fake-Kailey and Noah—friends falling for each other doesn’t happen enough. It’s normally the paranormal guy that gets the girl, leaving the best friend shafted.

The idea behind an alchemy elixir holding the keys to immortality could have been ripped out of Hilary Duff’s Elixir, but introducing the need to exchange bodies for a new one every ten years gave this one an edge. Cyrus, a man who hates those who blindly follow magic and ignore the underlying sciences behind the illusions, was tyrannical to say the least. He’s introduced as someone kind, loving, but then quickly mutated into a man with an uncontrollable ego. As far as making him a despicable character, I can safely confirm that venture a success. Unfortunately, Cyrus and the coven of Incarnates didn’t get much of a go once the introduction phase of the book ceased. There was character building there, and then it just disappeared in favour of inserting us into a high school full of teen drama.

It’s not that reading about who Kailey is and isn’t talking to, and which of her friends is allowed to date her brother wasn’t interesting, but it got a lot more exciting once the life or death tension kicked back in. The sleuthing and sneaking around town was reminiscent of something I’d expect from Nora Grey. But then, it’s always easier to spot the danger when you’re on the outside. Hearing this is going to be a two book series definitely makes up for the ending. This is one of those books—torturous, but in a good way. Hopefully, the second book will ramp things up, bring in more of the Incarnates again, and keep me hooked.

Recommended to:
Those who want something a little different in your reincarnation stories. And if you like high school drama, that’s a plus too.